With three third period goals, two by Zach Parise, Minnesota gained a valuable point, but couldn't secure the second point as they lose in a shootout.

Share All sharing options for: Wild rally in 3rd period; Fall in shootout to Red Wings 5-4

Many fans were just done with the Wild after 30 minutes. The struggling team had all kinds of shots and scoring chances, but Red Wings starter, Petr Mrazek, was doing just enough to frustrate the hell out of the Wild. After falling down early 4-1, and chasing their new goalie Devan Dubnyk from the net, the Minnesota Wild would score three times to tie the game in the third period.

Drafted 111th overall in the 2010 NHL Entry Draft, Teemu Pulkkinen scored his first career NHL goal on a long wrist shot that got past Dubnyk. Pulkkinen then took a goaltender interference minor to give the Wild their first power play of the game. The Wild captain, Mikko Koivu, took a hard wrister from the right face-off circle to even the score. Jonathan Ericsson would regain the Red Wing lead after his slap shot from the point found the back of the net with Justin Abdelkader screening Dubnyk. 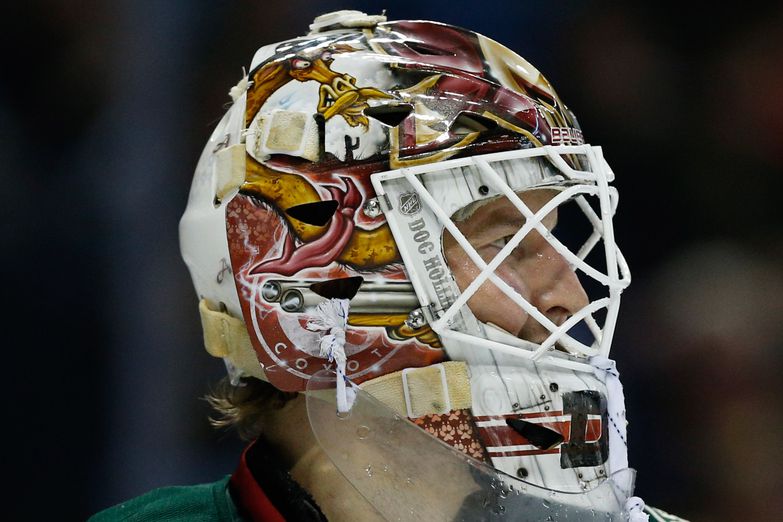 Listen to our podcast here, or find us on iTunes!

Minnesota looked to come back in the second period. Mrazek stone-walled the Wild at every opportunity. Even though the Wild controlled the first 40 minutes by taking a shot lead of 22-13, Detroit were the ones that got the two goals of the second period. The first of the two goals was a really nice deflection by Gustav Nyquist. Nyquist was able to deflect the puck down just below Dubnyk's glove. Then Xavier Ouellet scored by sending a shot wide-left, but the puck was redirected into the net after going off Justin Fontaine's skate. Dubnyk was beaten four times on just six shots and was eventually pulled after just 27:25 of game time.

Enter Darcy Kuemper. His first shot faced trickled through his five-hole and stopped in the blue paint of the goal crease. Luckily Erik Haula was able to find the puck and clear it out of harm's way.

Then Zach Parise finds the back of a waning net. Thomas Vanek took the initial shot from a shallow angle. Pominville gathered the rebound and shoveled it over to Parise for the goal. With 10 minutes remaining in the game and the Wild pressing, Vanek gathered the puck from the left half-wall, stick-handled through the Red Wings' defense and lifted one top-shelf over Mrazek.

Three minutes and 20 seconds later, Parise was in on the forecheck awaiting for Jon Ericsson to move the puck from behind the Detroit net. Ericsson did eventually move the puck, but Parise was able to knock it down and get a shot on Mrazek. Mrazek made the first save, but Parise got a second whack at it and tied the game.

After the game was tied, both teams traded chances until the end of regulation and throughout the overtime session. It would take a shootout to decide the game. Actually, it took shootout goals from Pavel Datsyuk and Nyquist to end this one. Both Parise and Koivu were stopped by Mrazek on their attempts.

The Wild will now break for the All-Star game, which is being held in Columbus, Ohio this year. The only Wild representative will be Ryan Suter, as the rest of the team will get a whole week off. They pick up a much needed point on the standings, but really, the second point would have much better.