The Wild should go back to the drawing board with the power play.

With the Wild shooting at a great rate with the man-advantage, the Wild need to figure out ways to improve their shooting percentage.

Share All sharing options for: The Wild should go back to the drawing board with the power play.

Minnesota's power play has been a sore spot for the team since October. It was looking to improve after putting up identical 17.8 percent consecutive seasons. They even signed Thomas Vanek in an attempt to improve goal scoring. After going 0-for-29 in the first nine games to start the '14-'15 campaign, you could say the Wild have failed miserably to make the other team pay for its indiscretions. 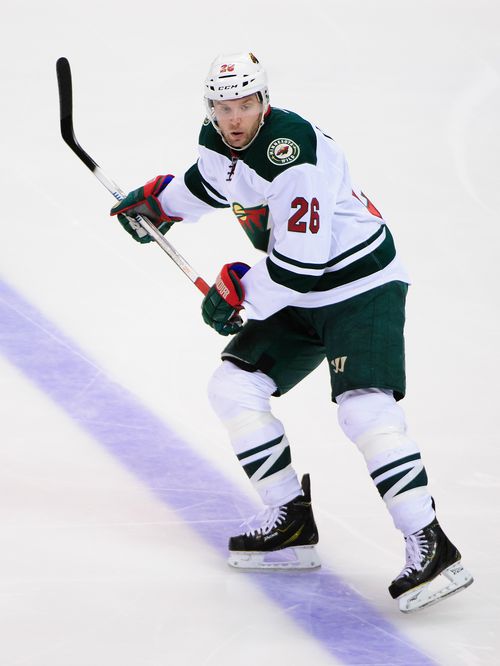 Early in the season I unveiled a ratio chart that compares all shot attempts (Corsi) to shots that go unblocked (Fenwick) to ones that end up being on goal (Shots on Goal). Basically it was a percentage of the amount of shots that were attempted that were actually getting through. This was important to look at as I was looking for comparables for teams that may attempt a lot of shots, but in fact aren't really threatening to score. I compiled the data using the raw power play Corsi, Fenwick, and Shot numbers from War-On-Ice.

Now that there is a decent sample size, let's have another look at those numbers.

Minnesota's 302 SF comes in at number two, behind only San Jose's mark of 312

The 521 Corsi For on the power play ranks seventh in the league. When you dwindle that number down to just shots on goal, Minnesota's 302 SF comes in at number two, behind only San Jose's mark of 312. When you look at just how many shots are getting through, the percentage is impressive. Sure 58 percent of all shots attempted are getting on net, but the Shots/Fenwick Ration is incredibly high. Three out of four unblocked shots are hitting their mark.

So what is the problem? Why is the Wild's power play only converting at a 15.8 percent clip? First, the 0-fer streak to begin the season was tough to overcome and it has weighed heavily on the players' psyche ever since. Minnesota's third-lowest on-ice shooting percentage of 9.6 percent is what the problem is.

It's interesting when you look at where the shots are coming from to see that it is ever-so apparent the Wild's power play offense runs through the men on the blue line.

According to War-on-Ice's hextally, the second highest location for shots is coming from the blue line. It counts for 148 shots yet only yielding three goals. Yes, there are 79 shots that came from deflected or tipped shots in the slot that more than likely came off of shots from the point. It goes even deeper when you look at the individual Corsi For by players. I pulled the stats from players that are positioned on the point on the power play which includes defensemen and Jason Pominville, who sees loads of minutes as a fourth forward manning the point.

A high volume of shots are coming from the defensemen, yet they are yielding the lowest shooting percentage.

Now I am not saying that the Wild should abandon the defensemen in the offensive zone. In fact, I enjoy a cohesive five-man unit shooting from anywhere and making themselves an option for the puck carrier. There's not much better than a Marco Scandella blast from the point for a goal, or Ryan Suter setting up Pominville for a one-timer.

While I think the defensemen should be active in the offensive zone, I think the forwards should be doing more amongst themselves rather than always looking towards the point for the first shot. When the first save is made by the goal tender and the puck is retrieved, the forwards are passing it to the point rather than putting it immediately back in front. Usually after the save the defensive box is broken and a forward of defenseman leaves his post to try and retrieve the puck. This usually leaves someone uncovered, but the Wild forward is either too hesitant to make the pass, or he's not seeing it.

Another experiment I'm completely over is the "Pominville at the point" experiment. Granted, he's getting the shots and the looks, but I feel like with him on the point, they are setting up the one-timer play. Some power plays opportunities this play is tried up to three times in quick succession with very little to no success as defenders can read it coming from a mile away. He also lacks the ability to pinch in from the point at the correct time.

Here's a play from the most recent game against the Florida Panthers. In this play, the Wild win the faceoff. Vanek sends the puck down the far wall to Koivu who heads behind the net. Zach Parise is in between 3 defenders but is available as an option. However, with three defenders around him, that pass is a very high-risk/low-reward pass. Other teams make that pass; the Wild don't. But as Koivu comes around the net, Pominville has the opportunity to pinch down to the circles uncovered as a passing option for a one-timer, but because he doesn't, the pass is broken up by a defender. Luckily the Wild did re-gain possession of the puck, but a Vanek hooking minor eventually negated this power play. It's little things like that including his inability to maintain the offensive zone when the penalty kill tries to clear the zone that have been getting on my nerves.

Ultimately, the Wild are shooting at a great clip, but with these chances coming from generally lower percentage areas, it may be contributing the third lowest PP on-ice shooting percentage. The forwards should be looking toward the net more rather than the point to create the offense. Defensemen should stay active, but only to clean up the rebounds that the goalies punch out and distribute the puck back down to the forwards. Doing this could help make the Wild's power play stay more consistent rather than these short stretches of success and long stretches of ineptitude.