Wild Push Blues to the Brink of Elimination; Win Game 5 4-1

Share All sharing options for: Wild Push Blues to the Brink of Elimination; Win Game 5 4-1

The St. Louis Blues came out with unrelenting pressure, but Devan Dubnyk, whose Vezina Trophy finalist announcement came prior to the game, kept his team in the game with his steady presence in between the pipes. 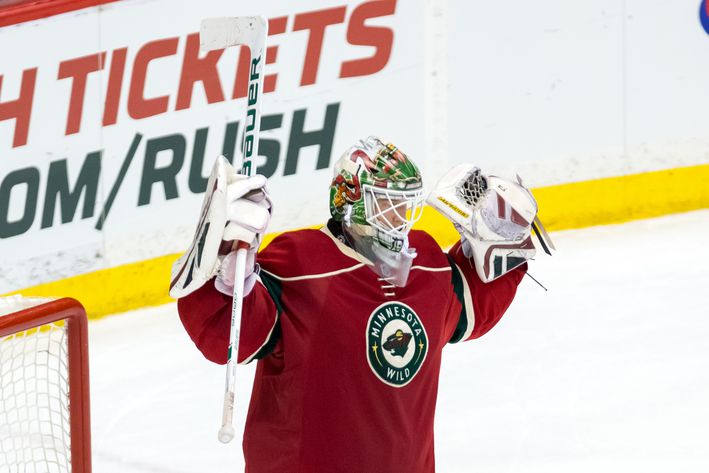 Vladimir Tarasenko, who has been killing the Wild all series long, got the first goal of the game on the power play. The Wild owned the best penalty kill in the league during the regular season, but the Blues have been able to score on them, both in the regular season and the post-season. The Wild went the first 11:05 of the game with out a shot on goal and nary a shot attempt on Jake Allen. At 11:06, Marco Scandella got the first Wild shot on goal and the first Wild goal. The hard slap shot came from the left faceoff circle and Allen couldn't handle it cleanly with the glove as it popped out and into the net. Minnesota was heavily out-shot in the period 12-3. Minnesota did have a power play in the frame, but could hardly enter the offensive zone. When they did, the shots were either blocked or sent wide.

It's one win. Nothing more. -Mikko Koivu

Minnesota came out of the locker room for the second period much better. They got extended zone time, even though the Blues did get some good chances, but Dubnyk was equal to the task. Chris Stewart, who has been very invisible this series save for getting destroyed by Steve Ott, finally won a board battle. He got the puck to the slot where Nino Niederreiter got a good shot off and caught the inside of the post and in to break the tie. The Wild then got a power play after Kevin Shattenkirk was called for interference. Mikko Koivu got the puck down low to the right of Allen and sent a pass over to Chris Stewart on the backdoor. Only, the puck never reached Stewart as it bounced off of Jay Bouwmeester's skate and in. The Wild out-shot the Blues 13-6 in the period. Dubnyk made two insanely huge saves on Blues' Alexander Steen. One was made with a quick right pad after Steen skated through Scandella, and the other was a circus style save, channeling his inner Dominik Hasek.

I don’t like being in that position very much. Some guys are good at doing that. I’m not Dominik Hasek," Dubnyk said after the game.

Things did eventually get rough, when Ott and Stewart took coincidental minors for roughing midway through the 2nd period.

The Wild went back to defending the lead in the third as they tried to hold back the big push the Blues were going to have in the early part of the third. The Blues' push was akin to being on the arena floor during a rock concert where the mosh pit pushes everyone in front up against the rail. St. Louis out-shot the Wild 19-3 in the period. Dubnyk was huge again, and the Wild's team defense did a great job of collapsing down in front of its netminder to block shots and clear the zone. Of the three shots on goal the Wild had in the third period, Charlie Coyle's goal at 14:50 that put the last handful of dirt over the Blues' grave. Thomas Vanek hustled after a puck in the far right corner and dished the puck to Coyle in the circle. Coyle took advantage of a Jason Zucker screen and shot a wrister over Allen's glove. Minnesota held on for the win with a final score of 4-1 and broke the streak of "first goal wins."

Koivu wants to have a short memory on Game 5 as well said, "It's one win. Nothing more."

The series will now shift back to St. Paul on Sunday for Game 6. During Friday's game, the NHL announced the start time for Game 6. It will be a 2 PM CT start since the New York Rangers dispatched the Pittsburgh Penguins in five games.