A good win Friday night, right Wilderness? It was a huge response from Devan Dubnyk, who stopped 36 of the 37 shots he faced in the game as the Wild stole a 4-1 victory from Scottrade Center. It wasn't pretty in the beginning, or in the end, for the Wild, but in the meat of the game, it struck when it could in very opportunistic fashion.

Each team traded power play goals, but a late third period penalty kill by the Wild came up huge when it needed to, as the Blues applied heavy pressure in an attempt to get back into the game. The Blues managed seven shots on the power play and Minnesota manged only only one shot on goal, but that was Nino Niederreiter's go-ahead goal and eventual game winner. The Wild may have had the best penalty kill of the regular season, but even then the Blues were one of the teams that made the Wild PK look mediocre. 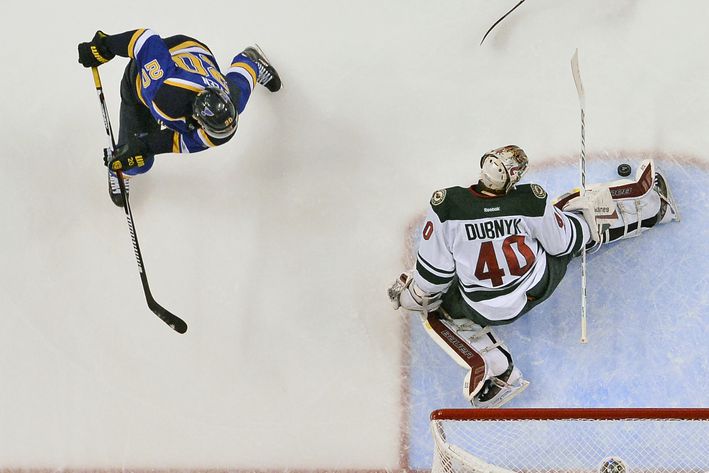 That part of the game was ugly if you're a Wild fan. Not only were the Wild out-shot 37-19 for the game, but the shot attempts favor the Blues quite heavily. For 5v5 shot attempts, the Blues directed 55 pucks towards the net. Minnesota only attempted 30 shots, which means the Blues got more shots on goal than the Wild attempted. St. Louis had long stretches of zone time and did well to pin the Wild deep in its zone.

Here is the 5v5 Shot Attempt chart for Game 5:

Courtesy of War On Ice

This was a classic PDO-type game. PDO adds the save percentage and the shooting percentage. This is supposed to show luck, and luck be a lady last night. Minnesota rode a motivated goaltender and the fact that Blues goaltender Jake Allen faltered, allowing the Wild to keep the game close.

The Wild had incredible luck that they were able to catch Allen having an off night and Dubnyk looking to respond after getting pulled in Game 4. PDO tends to fluctuate from game to game, and this is clearly a small sample size. A 1.183 PDO is crazy lucky, but all the Wild need in order to advance to the next round is one more game where luck is in its favor.

While the overall puck possession was skewed towards St. Louis, the scoring chances were closer. Only when the Wild led by two goals and were clearly not taking any chances in an attempt to cling to the lead did the Blues start to pull away.

Courtesy of War On Ice

You can see that the Wild did trade chances with the Wild. This is probably because of the ability of the Wild to keep most of the shots to the perimeter. Alexander Steen may have had the best chances to score on Dubnyk, but Dubnyk was there to deny with the pad and a miraculous scramble type save.

Thomas Vanek led all Wild skaters with three shots on goal in the game. Yeah, that Thomas Vanek that everyone complains about and set up Charlie Coyle's goal with a chip and hustle to to gather the puck in the corner in the Blues' end. Nino Niederreiter and Marco Scandella each scored their second goals of the playoffs, while Charlie Coyle and Mikko Koivu got off the schneid and potted their first goals of the post-season. Tarasenko scored his sixth goal of the playoffs, if you're comparing.

Faceoffs were both decent, and really bad. The good - Coyle and Koivu both won over 50 percent of their draws. However, Mikael Granlund and Kyle Brodziak both had identical 37 percent faceoff win percentages and were owned in the dots all night long. The Blues held a 41-36 edge in faceoffs.

Alex Pietrangelo led all skaters in time on ice with 28:17. The longest stretch was in the final minutes of the game. Ryan Suter saw 27:19 TOI and him and Jonas Brodin played the most solid defensively for the Wild. Actually, looking at the TOI chart for the Wild, Mike Yeo did a pretty good job of rolling all four lines and keeping the minutes fairly even. Of course PP and PK time will give some more than others, but in a game in which the Blues were dominating puck possession so to see the minutes so even, it's surprising.

Here is a Score Adjusted Corsi (Corsi is the legacy name of shot attempts) chart from Micah McCurdy (@IneffectiveMath) that maps out each player. You can see that Brodin and Suter were the best players on the ice for the Wild, and you can also see exactly how one-sided the game really was.

The Wild will need to continue to get the solid goaltending that they saw in Game 5 and they will need to apply the kind of pressure they had in Game 3 if they want to close out this series in six games on Sunday afternoon. A good process will often times lead to good results. Luck is all too fleeting and the Wild cannot expect to win games in the way they did in Game 5.