The Minnesota Wild have the opportunity to advance to the next round on home ice. Can they beat the Blues today?

Today's Game 6 between the Blues and the Wild will determine whether the Wild will advance to the second round for a re-match vs. Chicago, or St. Louis will get that shot in a Game 7 on Tuesday Wednesday.

This is one of those fun games where both team's commentators can say "The pressure's all on (the other team)!"

The pressure is all on Minnesota because they have a chance to finish of the St. Louis Blues on their home ice. If they fail to do so, they'll have to go back to Scottrade Center for Game 7, where they don't want to go (despite being 2-1 there this series, and 14-2 in their last 12 games on the road).

Playing the System: Gap Up! 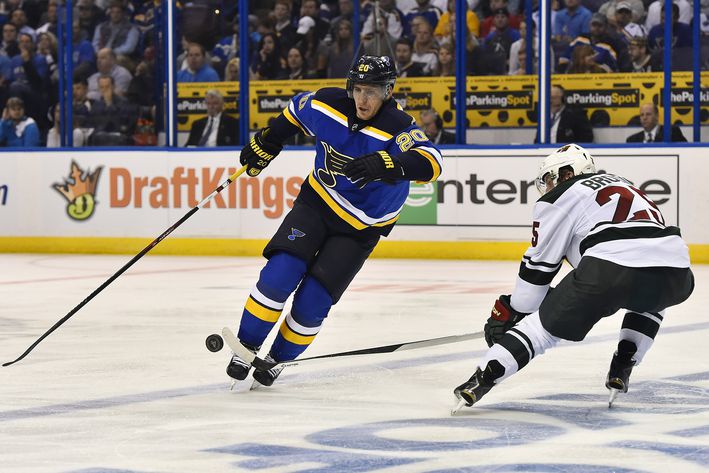 The pressure is also all on St. Louis, because instead of having to win *one* game to advance, they have to win *two* games to advance. St. Louis also doesn't want to keep repeating their storied history of being amazing in the regular season, only to get bounced out of the playoffs in Round One. And, oh, yeah- there are plenty of Ken Hitchcock Coaching Obituaries lined up and ready to go if he can't lead his really good team to a playoff series victory.

Oh, and both teams have the "NOBODY BELIEVES IN US" thing going on, with St. Louis having their first-round demons, and the Wild being left for dead in January. It's hard to say who has all the pressure on them.

We'll post lineup changes here as they become available. The key to look for with St. Louis will be whether Blues Center Jori Lehtera can return to the lineup. Lehtera has spent the large part of the season being Vladimir Tarasenko's partner in crime, but was out for Game 5 with a leg injury caused by an errant shot by Jay Bouwmeester. Steve Ott ended up getting 15:27 minutes of ice time in Game 5 due to the injury, so it would be a huge boost to the Blues if Lehtera can play.

As for the Wild, the only spot that has been up-for-grabs in this series has been the fourth-line winger spot adjacent to Kyle Brodziak and Justin Fontaine. Even with several NHL-caliber options at their disposal, it's been a two-man race between Sean Bergenheim and Matt Cooke. Cooke had a couple of shots and a scoring chance in Game 5, and coach Mike Yeo seems reticent to change his lineups after a victory, so Cooke will likely get the call, despite being ineffectual for large swaths of the season. Though, personally, for my money, Bergenheim has had the better series, and I'd love to see Yeo attempt to terrorize the Blues by being able to pick the match-ups where he can deploy Erik Haula's speed.

Both teams have had goaltenders who've had rough outings in their last starts at home. We saw Devan Dubnyk give a convincing response in Game 5, and now it's Jake Allen's turn to show how he can respond. He will almost certainly start tonight, and as most playoff games do, today's matinee will likely come down to which goaltender is better.

For the Wild, the Zach Parise - Mikael Granlund - Jason Pominville line has been providing the bulk of the Wild's production, with a combined 13 points (4 goals). On the flip side, Mikko Koivu, Thomas Vanek, and Chris Stewart have been really quiet, combining for 1 goal and 6 points. That's the Captain, biggest Free Agent acquisition, and their big Trade Deadline move. The Wild would love to see them step up.

On St. Louis' end, Vladimir Tarasenko has torched Devan Dubnyk this series, scoring 6 goals on 9 shots against Dubnyk. Fun fact: In this series, Dubnyk has a .333 Sv% against Tarasenko, but a .938 Sv% against everyone else on the Blues. This is reflected when you see that no one except Tarasenko and Patrik Berglund have more than one goal this series. Guys like David Backes and T.J. Oshie will need to step it up, but I sincerely hope they wait until next year to do so.

Where to Find It

Stick around for post-game coverage here at Hockey Wilderness! You can also get a great Blues perspective over at St. Louis Game Time!

Enjoy the game, and Go Wild!