Why the Wild Failed, and How do we Fix It?

Share All sharing options for: Why the Wild Failed, and How do we Fix It?

The past few seasons of Minnesota Wild hockey has been a lot of fun. We've had our happy days, sad days, some real head scratchers and even a few of those elusive stolen games. Despite how diverse the Wild's seasons have been since Ryan Suter and Zach Parise decided to carry this team on their backs, one thing has remained constant. The Wild go to the playoffs, and the Wild meet their inevitable doom against the Chicago Blackhawks.

Yes, just as every morning the Sun will rise, every Wild playoff appearance the past few seasons has ended with the Blackhawks bouncing the Wild from the second season. It's becoming a little tiresome wouldn't you agree?

Now it's fairly easy to blame all this on the Hawks simply being a better team. After all, in 2013 they certainly were very much the better team. You could blame it on Patrick Kane being ungodly good. You wouldn't be wrong there either. You could blame it on the S-word, bouncing pucks off those bastard inventions made mandatory for "player safety concerns" has become one of the worst running jokes since the invention of the hand-buzzer. Of course, Bryan Bickell seems to have the Wild's number. In the Wild's 11 playoff games against the Blackhawks, Bickell has scored 7 goals including 2 on the power play. 2 of his goals have come with an empty net as well, but those still count all-the-same.

Perhaps you find issues with other aspects of the Wild's game that seemingly have been corrected using simple math. The subtraction of Clayton Stoner has eliminated any chance of another #Stoner2Hossa moment. Although Nate Prosser, if he were to crack the lineup could make a fitting replacement. We've had our share of other fluky situations like goaltenders going down during warmups as well. Fortunately, it doesn't look as in Niklas Backstrom will be dressing for this series, and with Josh Harding all but out of the picture that leaves Devan Dubnyk and Darcy Kuemper to guard the cage this time around.

With all the drama surrounding the Wild and Hawks playoff meetings, life would seem to be just a little bit simpler if we didn't have to see them at all this go around (thanks Nashville. You had 1 job to do...)

Part of the Wild's problem when running into the Blackhawks has been some historically poor PP time. Given the Wild's sseason long PP struggles, I wouldn't pretend to think this will be a difference maker for the Wild. Not seeming to be able to figure out how to crack an oppositions PK with the first PP is maddening to watch. A decent PP would be a welcome change however.

The Blackhawks were not exactly lighting it up on the PP either, but they definitely were no slouch with the extra attacker. In 2013 they were just 2/13. In 2014 they posted an improved mark of 3/13. Overall, 5/26 in 2 postseasons against the Wild, good for 19.2% conversion over those 2 post seasons. By comparison, the Hawks have definitely outplayed the Wild with the extra attacker.

Now the Wild might not be able to improve on their PP numbers by much, but if they can manage to not break so often on the kill, it would go a long way towards helping get this monkey off their back. With the Wild killing penalties a touch over 86% this season, it's not tough to make the argument that we should expect the Wild to bring this stifling PK to this series.

Continuing with the numbers game, we can examine the fancier side of the argument against the Hawks in the past 2 post seasons.

While the numbers do improve, pretty vastly in some areas when you compare both post seasons side by side, they do not offer me much comfort in believing the Wild will indeed improve on these too much against a proven playoff powerhouse like the Blackhawks again. Luck has simply not been on the Wild's side. While it's great to see their possession get a boost, faceoffs and offensive zone starts remained elusive against the Hawks and when things are pretty notted up, the Hawks are simply scoring more 5v5 goals.

One of the major differences between our first rodeo with the Hawks and this one is personnel. A lot of players have moved on from from the Wild's first 2 attempts at besting the Hawks. Dany Heatley, Devin Setoguchi, Clayton Stoner, Cal Clutterbuck, Pierre-Marc Bouchard, Zenon Konopka, Mike Rupp, Torrey Mitchell, Tom Gilbert, Matt Cullen, Justin Falk, Cody McCormick, Matt Moulson, and Ilya Bryzgalov, all gone.

Just 11 players who saw post season action from 2012-2013 campaign remain in the organization. Stephane Veilleux wont see any time this year and Nate Prosser is likely going to need some injuries to find his way into this lineup. Keith Ballard, who saw 3 games last post season may never take to the ice in an NHL game again.

While the core bits are still in place with Minnesota, we've seen a lot of secondary changes here. Somewhat refreshing to know we are throwing new parts at the Hawks each year. Yet a difference in outcome has not been found. Do the Wild have what it takes to best the Hawks this go-around? Well, I don't want to spoil my picks for our series prediction piece  which is forthcoming, so I'll leave a little mystery, for now. 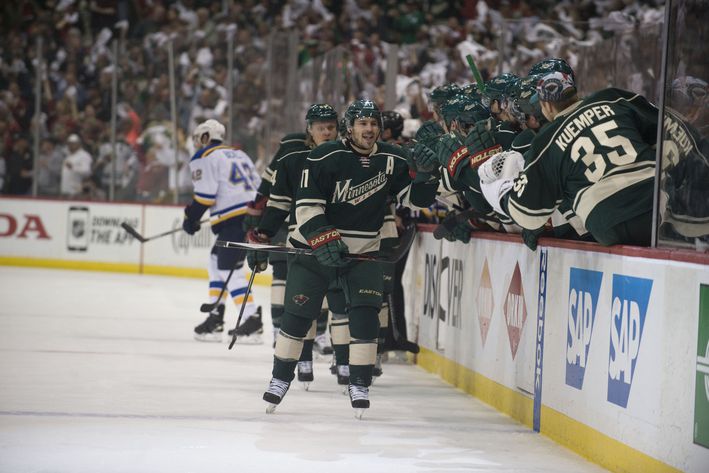 We wrap up Sunday afternoons series victory, and look ahead to preview Chicago.

For what it's worth, with how the Wild are playing since prying Devan Dubnyk away from the Arizona Coyotes, we stand a much greater shot this time around than we ever have. Our PK against the Blues was pushing asides penalties at an 80% clip. Not exactly comforting when your PK was nearly 7 percentage points higher in the regular season. That will need to improve as the post season progresses.  The power play in those 6 games however was 4/12, good enough for 33.3% which I don't have to tell you all is miles above their 15.8% rate of the regular season. Both teams would manage to score a shorty in the 6 game series as well.

The series really comes down to who is going to do it better at even strength. The Wild have found a great bend-but-do-not-break defense this season, and their transition game against the Blues was really the difference maker in even strength scoring. For the Wild to break-through the Hawks this time, we will need to see all elements of their game come together. Getting hemmed in our own zone for large stretches like we saw against the Blues is not a recipe for success against the Blackhawks. They will make you pay.

It felt like the Wild took the Hawks to the edge last season. Yet, the Hawks still dispatched the Wild in 6 games, giving them the level of comfort we enjoyed against the Blues in our opening round. The Hawks goaltending is a serious question mark right now, but last year Corey Crawford showed up big when the Hawks needed him the most.

The Hawks have also showed us they do not quit. Against the Nashville Predators, they were never out of games no matter the deficit they were in. We're going to see a lot of heart out there, and I can't imagine seeing the Hawks tire late in games like we saw with the Blues.