Boring Hockey and the Minnesota Wild

Share All sharing options for: Boring Hockey and the Minnesota Wild

It's been a long known stigma that the Wild play a boring brand of hockey. Ever since the Wild hired Jacques Lemaire and his patented Neutral Zone Trap that led the New Jersey Devils to Stanley Cup championships in the '90's. The Wild were conscious of this fact when they hired Todd Richards after both the organization and Lemaire "mutually" chose to part ways

"The type of hockey we want to play is up-tempo (and) fast. You want to dictate the pace and dictate the tempo of the game. It becomes an entertaining game to watch. There will be a transition period, but I think it's easier to go from a defensive style to an offensive style. You ask every player in the League, that's the type of game they want to play,"

Richards said the day he was announced as head coach to Minnesota Wild fans.

When the team forgot how to play some semblance of defense on its way to missing the playoffs in consecutive seasons and playing below .500, they turned to Mike Yeo, another rookie head coach.

In Yeo's press conference after being introduced as the Wild's third coach in franchise history he spoke about what he wants the Wild to be known for:

When people talk about the Minnesota Wild, going forward, I would like them to use words like, 'aggressive,' 'physical,' 'detailed,' 'structured,' 'smart.'

He was hired as the Wild's minor league coach during Richards' tenure because they coached a similar up-tempo, possession-style game and that would help the young kids learn that style before they made it to the NHL. Now six seasons removed from the Lemaire era, why is it that the Wild still have this reputation for being boring?

Just search for "Boring Minnesota hockey" on Twitter and enjoy.

Hey @EddieOlczyk, call out Minnesota's style of play for what it is...boring. It's bad for the sport of hockey.

Is it ironic that the Minnesota WILD have always played such boring hockey? Somebody page Alanis

Minnesota may be the state of hockey. But their style of play results in a state of unconsciousness. #boring

I even heard one of the Dan-ettes on the Dan Patrick Show ask that if a Game 7 between the Wild and the Flames would still be exciting when talking about the recent Game 7 match-up between the New York Rangers and Washington Capitals.

Yes, the Wild have been known to play some terribly boring hockey.

The Wild have for year after year been ranked in the bottom half of the league when it came to goal scoring. While goal scoring isn't necessarily the indicator of "exciting hockey," those results are awfully boring. The only season in which they broke into the top 15 was this most recent season. In fact, that 12th place ranking was one less than the Anaheim Ducks, better than the Nashville Predators, San Jose Sharks, Winnipeg Jets, Chicago Blackhawks, Los Angeles Kings, Pittsburgh Penguins, Montreal Canadiens, and a number of other "high-profile" teams in the league, yet the label of being boring is never applied to those teams. 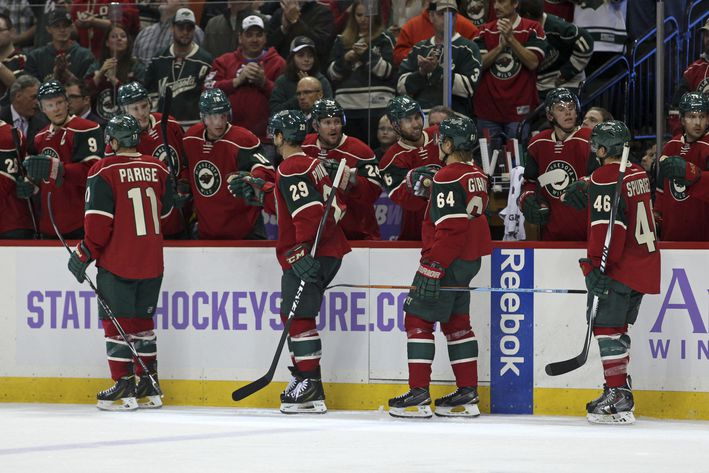 The Wild seem to finally be moving away from the tedious, low event hockey that has become their trademark.

Hockey Wilderness's Ger Devine wrote about how the Wild have pivoted from their low-event hockey of past seasons to one that features better possession metrics and more unblocked shot attempts. He used analytic metrics to state his case about the Wild playing differently this season. Of the stats used, Shot Attempts (Corsi) per 60 minutes, Unblocked Shot Attempts (Fenwick) per 60 minutes, and he used the game situations at 5-on-5 with the score situation "Close" (when the score is within one goal in the first two periods and tied in the third period).

I am using the same stats, with the same strength of 5v5 and instead of Close, I will be using Score Adjusted metrics. Score Adjusted just tries to eliminate "score effects" (or the tendency of teams to go into a more defensive shell when the have a substantial lead. Big score differences tend to skew possession stats because the team that is behind on the scoreboard usually applies way more pressure and is not indicative a team's true ability to possess the puck).

Your Minnesota Wild are ranked 11th in the league in UST/60 with a mark of 40.6. This is one-tenth behind the Eastern Conference favorites New York Rangers, better than the Jets, Ducks, Bruins, Capitals, Senators, Red Wings, and Canadiens. When you just look at SAT/60, which is a proxy for Time on Attack rather than scoring chances like unblocked shot attempts, the Wild are still in the top half of the league at 14th. This puts them just behind the Rangers and tied with Detroit. When you put it all together, Minnesota is controlling the play 51.4 percent of the time.

The Wild have made serious strides in changing the way it plays the game, but that reputation of being a trap team still follows. There is plenty of room for improvement before the Wild can be considered an elite puck-possession team. They can always score more goals, and the power play is among a level of putrid that it reeks of  five year old decomposed stank, and has been, that the only way it can go is up.

If you're just looking at the Wild's struggles in the playoffs against the Blackhawks as an indication of how they play, then you're missing the strides this team has made to provide a better on-ice product. Yeo said he wanted a detail-oriented, and structured team from the moment he was named the bench boss. That's what we've got - for the most part. It takes time to build an elite puck possession team, not to mention it takes acquiring the right personnel that buy into the style of play. It's taken a long time to shake the ghost of Jacques Lemaire, and even cost the job of one coach, but Minnesota's play from this year on out is anything but "bad for the sport."

Stats provided by War-On-Ice, and ESPN.