Ryan Suter is a really good defenseman. Just thought I would get that out of the way before we started.  This is in no way an indictment of the work he has done since coming to Minnesota and providing the much-needed, rock-solid presence on an inexperienced blue-line. It's obvious that the calm that he plays with has seeped into the young defensemen on this team; certainly aiding in their positive development. There are countless ways in which Suter will be able to contribute to this lineup for the next 50 years of his contract. Scoring a goal in the final seconds of a game where the Wild are trailing by one and desperately need to force an overtime in Chicago? Nope, he's not going to contribute in that way.

We've reached the point with Suter where there is simply no logical explanation for having him on the ice in high-leverage, must-score situations, such as the power play and final minutes when trailing. Over the past three seasons, Suter has posted an anemic 1.6 shooting percentage at 5 vs 5. Among Wild defenders with >100 minutes in those three seasons, only Stu Bickel is lower on that list at 0%.

Shooting percentage isn't always a great indicator of offensive potential or talent, but when a guy is scoring on just over one in a hundred shots in a three year span I think it provides a very clear picture of what to expect from said player going forward. In Suter's case, that means boat-loads of harmless wrist-shots from the blueline.

It's not as if the Wild are simply stuck with Suter in these spots because they have a scrap-heap of defensemen piled up behind him. Spurgeon, Scandella, and Dumba all boast considerably better all-around offensive numbers than Suter. Most notable among these three is Dumba. There's no doubt that he is undoubtedly the most dynamic offensive creator of the defense corps, and not having him on the ice for the final 30 seconds of Game 1 after a timeout is beyond puzzling. Suter played the entire final two minutes of Game 1 that saw Minnesota struggle to even gain the offensive zone.

With the goalie pulled, the trailing team wants nothing more than to create chaos in the offensive zone. Loads of player and puck movement to rotate the defense out of passing and shooting lanes. No defenseman on this team can move and create chaos as well as Dumba. Couple that with his X-factor shot, and you have the perfect defenseman for desperate offensive situations.

Jason Pominville's Reputation for Missing the Net is Overblown 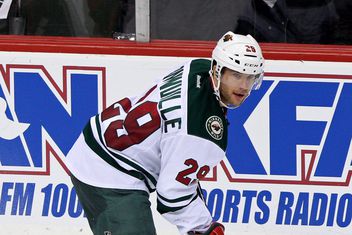 Does Jason Pominville really miss that many shots?

Another high leverage situation that has seen Suter as a staple is the number one power play unit, a trend that has continued into the playoffs. Yes, the Wild are 4 for 12 on the power-play in these playoffs, but that production has come from an empty net goal, two goals by the second unit, and a Mikko Koivu bankshot from the goal-line. Suter has served as the quarterback for the first unit for the entire season. His role is supposed to be that of a distributor, swinging the puck to Koivu and Pominville on the half-walls. For the most part, Suter does a fine job as a passer on the power play, but he posts so little threat as a shooter that teams are willing to cheat over to the other Wild players to take away better shooting lanes. This year, there were 29 defenseman who played at least 200 minutes on the power play. In almost all cases, these are the quarterbacks, the guys leading the charge and orchestrating what goes on with the man advantage. Among those 29 power play quarterbacks, here are Suter's ranks in some important offensive categories (I will use per 60 minute stats so as to glean out some of the minute differentials):

We now go to Mike Yeo for comment on the evidence as stated above:

At this point, most of us have heard the "reasoning" for why Yeo continues to deploy Suter in these situations. Yeo realizes the commitment/investment his owner and GM have made in Suter, and in the interest of keeping his job long term, Yeo stays in Suter's good graces by continuing to play him in the minutes to which he has become accustom. OK, that's a fair point. Yeo is in fact human, and we humans we prefer to have jobs. But the problem is, it is Yeo's job to put the players on the ice that give his team the best chance at winning.

The Wild are past the point of being a fringe contender with simple aspirations like just sneaking into the playoffs. This team is capable of winning a Stanley Cup. The margin of error to accomplish such a feat is remarkably small. When Mke Yeo insists on drawing water from the dry well of Suter's offense, he's a coach who is willfully putting his team at a disadvantage in the most crucial games of the year.