Wild Turnover Series As They Switch to St. Paul Trailing 2-0 in the West Semis

Share All sharing options for: Wild Turnover Series As They Switch to St. Paul Trailing 2-0 in the West Semis

Minnesota fell by a score of 4-1  in Game 2 of the Western Conference Semifinals. One story to this game: Turnovers. The Wild were killed by turnovers at the transition areas of the ice - each blue line. Yep, turnovers cost the Wild Game 2, and there's no spinning that one.

The Wild and Blackhawks skated to a scoreless tie in the first period as the Blackhawks out-shot the Wild 9-6. There was one power play for Chicago after Thomas Vanek was pushed into Corey Crawford by Duncan Keith, but the on-ice official saw it as goaltender interference. The Wild played an all-around decent first period defensively as most shots from the Hawks were kept to the outside. 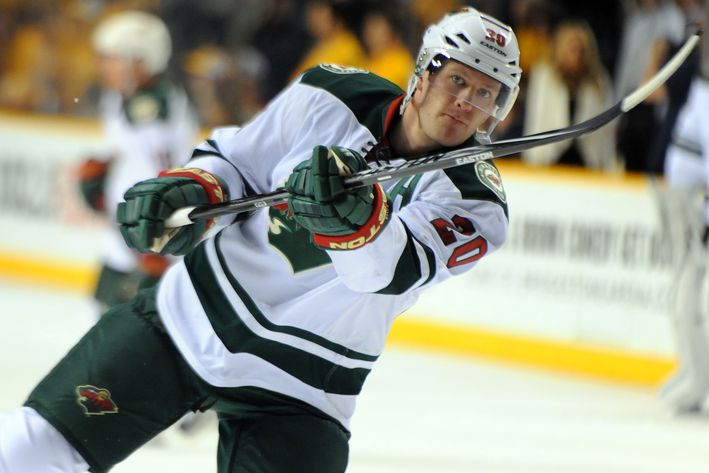 A breakdown of why Suter doesn't fit must-score situations

The second period was quite different. Minnesota did get some great chances on Crawford, even had a couple whacks on the puck from Zach Parise, but the Chicago goalie was there with the right pad. Chris Stewart had a partial breakaway when Johnny Oduya poked the puck away and then hauled Stewart into the end boards. There was no call on the ice for tripping and Mike Yeo was incensed as it negated a scoring chance, and Stewart was visibly in pain as he went straight to the locker room. I was mistaken during the game. In the NHL there had been a rule that allowed players to get away with tripping if they had gotten the puck first. However, prior to this season, the language was changed in the rule book that would at least have a penalty called on that exact play. The Wild did eventually get a power play when Andrew Shaw cross-checked Jared Spurgeon in front of the Wild net. Ryan Suter was unable to keep the puck in the zone on right side and then made a bad play as Marian Hossa read his attempt to go back up the wall and it sprung a 2-on-0 with Hossa and Jonathan Toews. Dubnyk made the original save on Toews' shot, but the puck would pop in the air and glance off the knob of Dubnyk's stick and trickle just over the goal line. The Wild did their best to respond, but couldn't crack Crawford. Kyle Brodziak had a breakaway chance denied. At 19:40 of the second period, Thomas Vanek tried passing to Charlie Coyle at the Hawks' blue line, but Coyle couldn't handle the pass and Nino Niederreiter was way offside. Suter thought the play would continue into the Blackhawks' zone, but he lost Patrick Kane. Duncan Keith didn't lose Kane as his two-line pass connected with Kane and Kane didn't miss in the lower left corner.

With the Wild on the ropes and in danger of falling 2-0 in the series, Matt Dumba scored on the power play to cut the lead in half. Minnesota had a chance in the game, but Chicago was just so good defensively. For as awful as Chicago was in its own zone in the Predators series, they have been magnificent against the Wild. Patrick Sharp would put the nail in the coffin with his goal at 7:39 of the third period. It was a pass meant for Matt Dumba, but the pass was air-mailed and was too much for Dumba to handle. The Teuvo Teravainen corralled the puck and sent it right back up to Sharp at the Wild blue line. The play caught the Wild in a bad change and Sharp was able to place the puck above the left pad of Devan Dubnyk and below his glove. Dubnyk, whose been solid for so long, has shown his glove to be slightly suspect through two games in this series.

The Wild would pull Dubnyk for the extra-attacker with 2:14 left. Patrick Kane was able to get the puck in the neutral zone after Niklas Hjalmarsson blocked a centering pass from Jason Pominville and gave it to Sharp, who then got it to Kane. Kane had to work for the goal as Suter was basically accosting him as he let his shot go in to the empty net.

There was a play midway through the third period when Marco Scandella got a hard slap shot off from the left boards that hit Crawford square in the mask. Crawford was clearly shaken by the shot as he appeared wobbly and needed to use the net to support himself. After his ears stopped ringing, he replaced his mask at the bench and continued to play on. Some were asking about how concussion protocols go for goaltenders. I would assume they are the same for goalies, but at the same time, the puck going off the mask is different from an elbow hitting a head. Firstly, the masks are made for exactly that. The impact is distributed around the head rather than into the head. Secondly, the impact hurts more on the jaw and ears as the mask gets pushed back into the lower jaw, which has some give, and it pops your ears. it does cause some slight disorientation, but it is not a concussion necessarily, even though symptomatically, it looks the same immediately.

The series switches to Minnesota for Games 3 and 4. As little as home-ice advantage mattered in the Blues series, the Wild is going to need to make it count in this series. Game 3 will start at 7 PM CT from St. Paul.