Lack of a Gamebreaker Fatal Flaw for Minnesota Wild

The Minnesota Wild are down 3-0 because of their biggest weakness: A lack of a star player.

Share All sharing options for: Lack of a Gamebreaker Fatal Flaw for Minnesota Wild

There are other reasons for the Wild being on the verge of losing this series.

The defense, led by Ryan Suter and Jonas Brodin, is having a rough go. Devan Dubnyk's not been the rock in net the Wild have been accustomed to. The Wild's secondary scoring has been non-existent.

But to me, the major difference in this series is fairly simple: The Blackhawks have two gamebreakers in Jonathan Toews and Patrick Kane. The Wild? No one of that caliber. Probably.

We can have that debate with winger Zach Parise, but I fall on the side that he isn't quite at that level. For sure, he was at that level in his younger days with the New Jersey Devils, and Parise's defensive value makes him more valuable that solely looking at his offense would indicate. But for me, would you put him in the same tier as Toews' two-way game? I wouldn't. And I wouldn't put him quite in the same league as Kane's scoring.

The Wild are like 'The Office' without Steve Carrell. A talented ensemble, but where's the Michael Scott?

As for everyone else? No. Nope. No. Parise's the Wild's best player. If he's not a superstar, no one else is. At least not now. But could that guy be with the Wild right now?

The hope was when the Wild signed Thomas Vanek last year to his 3-year, $19.5 million deal that he would be that guy, at least in terms of scoring. We don't know what's going to happen next year, but Vanek failed to find significant chemistry with any of his teammates, and didn't have that vintage Vanek "I'm gonna carry this team's scoring" month. He could rebound, but being on the wrong side of 30 won't help that cause.

When Mikael Granlund was drafted by the Wild, the hope was that he, too, could become a guy who was like that. Our hopes were raised as he had a stellar career in Finland, at one time being considered an elite prospect. Things haven't gone quite as planned in that regard. While draftmates Tarasenko, Taylor Hall, Tyler Seguin, and Ryan Johansen have established themselves as premier young forwards, we're still waiting for Granlund's breakout. A step back in production and yet another major injury this season means that book could be closing on those hopes very soon.

On the wing, the best bets to elevate into that level are probably Jason Zucker and Nino Niederreiter. Zucker's season looks worse than it should have due to missed time due to injury, and low ice time because of the Wild's depth. But really, he had a fantastic goal-scoring season, as his Goals/60 was only behind Rick Nash at 5v5 this season. If Zucker can continue to round out his game (his assist totals were fairly brutal), he could maybe get around that level. But until then, he's kind of a one-trick pony (though, what a trick to have).

Niederreiter has, despite countless narratives saying otherwise, been a fantastic defensive player with the Wild and has also flashed good offensive skills. The problem is those skills seem to be just that, good. I think Nino will be a very good two-way player (and I think his point totals were better than they initially looked), but his offense needs to take another step to get into that conversation. 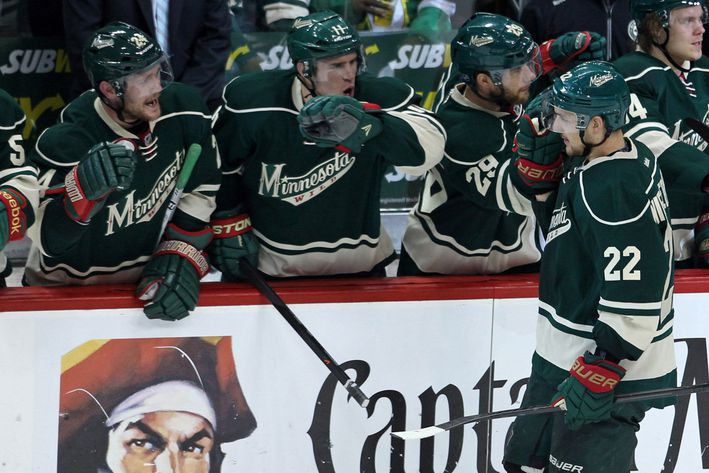 The Wild have been getting outplayed all postseason. How can this be?

On defense, Jonas Brodin's excellence at such a young age lead many to believe that he could get to that sort of level. As for me? I'm not too sure that's going to happen. His defense, of course, is really great, and he's good at moving the puck up the ice. But is he ever going to have enough offensive value to elevate him to that level? I think that Brodin's too good at moving the puck to eventually not have that translate to the offensive zone, but there's a big gap between where he is now offensively and where he'd need to be to be a star.

Of anyone on the team right now, is Matt Dumba perhaps the best bet to be a superstar caliber player? After a stint in Iowa, Dumba seemed to put a lot of his skills together at the NHL-level, being able to utilize his speed, skills, and booming shot to help the Wild as a 20-year-old. Dumba has progressed with the defensive side of his game to the point where it's encouraging that he can become a solid defender in the NHL, but it's not all there quite yet. He'll have to keep on this trajectory, but so many things can happen with a young player that it's more likely than not that Dumba won't reach that elite level we're hoping for.

All in all, this team seems like the television show "Parks and Recreation." There's a good mix of veterans and youngsters. A talented ensemble, showrunners that usually seem to get the most out of them. The one difference? There's not a transcendent figure like Amy Poehler to play off the ensemble perfectly and get the most out of them. (Note: Going off this analogy, Parise is Nick Offerman, Dubnyk is Rob Lowe, and Dumba is, of course, Chris Pratt.)

This isn't to say that the Wild can't beat a team, even a very good team, that boasts such a superstar. The Wild maybe got lucky in that series, but they were able to topple Vladimir Tarasenko's Blues this season. The Wild dominated Colorado last season. They weren't the best playoff team ever, by any stretch, but they had that star player in Nathan MacKinnon.

But it seems like, until the Wild get that superstar-level player, the combination of Toews and Kane just appears to be too much for the Wild to handle. Can one of these players develop into a true star player to help the Wild match up? Alex Tuch completed a good freshman year in college, is he a guy to pin our hopes to? Can General Manager Chuck Fletcher get creative and acquire one?

Until then, it's hard to watch these last three series versus the Blackhawks and think that the Wild can beat them without that gamebreaker.