Trading Mikko Koivu Will Hurt, Not Help the Wild

Rumors are the Wild may be looking to trade their captain. It's hard to see such a move working out for the better..

Share All sharing options for: Trading Mikko Koivu Will Hurt, Not Help the Wild

Mikko Koivu isn't a "Number 1 Center™". When you look at centers that make close to his $6.75 million cap hit (Patrice Bergeron, Anze Kopitar, Niklas Backstrom, Joes Thornton and Pavelski), it's fair to say that he's not in that class of player, and therefore makes too much money. His 12 points in his 28 most recent postseason games is unacceptable. The Wild would benefit more from having Koivu transition to a defensive role and have a better offensive threat take his prime power play minutes.

I have no issue conceding this. But despite all this, I've cringed every time a Wild fan, or member of the Minnesota media has suggested that the Wild would be better off trading him.

We've heard Michael Russo of the Star Tribune hint throughout the year that the Wild have been exploring the possibility of unloading Mikko Koivu's contract, and earlier this week Elliotte Friedman wondered whether Montreal would be a good landing spot for the Finnish center.

Friedman is one of the most plugged-in reporters in the NHL, and nobody knows the Wild like Russo. If both of them are wondering about Koivu being traded, it's safe to assume there's fire there.

It's one thing to trade Koivu. It's another thing entirely to replace him.

While I admittedly have an appreciation for Koivu and his impact on the ice, I want the Wild to get closer to winning a Stanley Cup. If that means trading Koivu- or anyone, for that matter- I'm on board.

The problem is, I don't think that trading Koivu is going to make the Minnesota Wild better. Not in 2015-16, at least, which is important, because with all the trades the Wild have made to deal away picks and prospects, the Wild are undoubtedly in "win now" mode for the foreseeable future.

There are a few things that a lot of people ignore when they express a desire to trade Koivu. The first is that, while he probably carries negative value against the cap, he contributes positively to the Wild on the ice. By just about every statistical measure, Koivu has been one of the NHL's elite shutdown centermen, stifling opportunities for opponents on the ice.

Being as dominant as he is defensively opens up his teammates to generate more offense, even if Koivu isn't creating those chances with offensive skills you'd associate with a $6.75 million center. Domenic Galamini of Own the Puck released charts that show the impact on linemates a given player has, based on shot attempts. This is Koivu's chart.

As you can see, Koivu not only consistently improves the defense of his teammates, he has a positive impact on his linemates' offense. When players are on the ice with Koivu, they attempt more shots than they would otherwise, year after year. That's a fact.

And while Koivu has a reputation for being a slouch offensively, he actually compares reasonably well to other highly-regarded two-way centers in the league. Over the past three years, Koivu has scored 2.13 points for every 60 minutes he's played (in all situations). Certainly not elite (Sidney Crosby leads the NHL with 3.61), but it's not far behind Brandon Dubinsky (2.24), Ryan O'Reilly (2.23), or David Backes (2.21).

Which leads us to the second thing that people ignore when discussing trading Koivu: actually replacing him. Because an elite defensive center who provides respectable offense isn't particularly easy to find. It's one thing to say that you'd trade him. It's another thing entirely to find someone to fill his role. 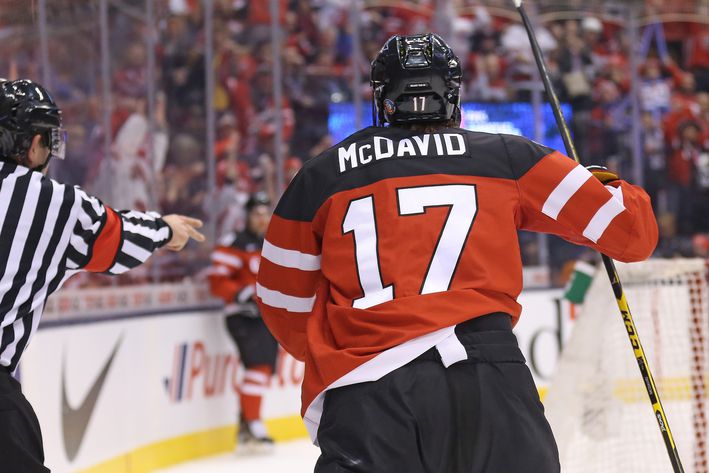 We're profiling 2015 Draft Prospects. Who will the Wild choose?

There's little chance of filling that role internally. The Wild's depth at center is alarmingly weak. Mikael Granlund and Erik Haula disappointed last season, and are both stylistically different than Koivu. In theory, Charlie Coyle could work in that role, but the Wild are still struggling to decide whether he's a power winger or a defensive center.

As for prospects? Tyler Graovac's size gives hope that he can eventually fill that role, but the likelihood of him stepping into a major defensive role in the NHL and providing comparable performance to Koivu is slim. No other Wild center prospect is close to NHL-ready.

Too bad there aren't any centers available.

Don't believe me? Here are the Top-10 centers available as Unrestricted Free Agents, as sorted by cap hit from last season.

This crop of Free Agent centers is particularly unappealing- that's actually Kyle Brodziak in the Top-10*. Jiri Tlusty is the only player on that list that's under 30, and he's not in Koivu's league as a player. After that, you have a mix of aging (Matt Cullen), ineffective (Jarret Stoll), and overrated (Antoine Vermette). You won't replace Koivu there.

Which leaves the trade market as the only feasible option to replace Koivu in the offseason. And the Wild have indeed been rumored to be on the hunt for a center, with Russo speculating the Wild may take a run at Maple Leaf Nazem Kadri or Shark Logan Couture.

The problem with that (ignoring Koivu's No-Movement Clause for a moment) is that it makes no sense for a team to do a one-for-one swap where they give up a young, productive center for an aging Koivu. In fact, it's much more likely that with so many teams (including Montreal, Friedman's suggested landing spot for Koivu) up against the cap, Koivu is more likely to be moved for another high-priced veteran. All this means that in order to get the center they covet, the Wild would have to make a significant deal separate from any Koivu trade.

Furthermore, obtaining a player like Kadri turns a weakness into a strength. Koivu-Granlund-Coyle centering your Top-9 is a bit underwhelming, and acquiring Kadri would change that. Suddenly, the Wild would be in a position where their 3rd line center would either he the elite defender Koivu, or the immensely skilled Granlund. In such a scenario, why would the Wild look to eliminate that gain by trading Koivu?

As evidenced by Toronto finding a sucker taker for David Clarkson, contracts that are much worse than Koivu's have been moved in the NHL recently, so it's entirely possible that General Manager Chuck Fletcher will be able to move his team's captain. But given the contributions Koivu makes to the Wild, and the unlikelihood of an available player being able to provide the qualities he brings to the ice, I'm skeptical that a Koivu trade will make next year's Wild team better.