Already loaded with top young players, the Jets take a defender who could emerge as the best in this draft with Pick 25.

The Jets have great prospects where it counts. Look beyond NHL mainstays Mark Scheifele and Jacob Trouba, and you'll see players who should be making their mark in Winnipeg for years to come. First-round pick from last season Nikolaj Ehlers is likely to get a look in training camp next year after torching the Quebec league for 101 points in 51 games. Nicolas Petan is small, but very skilled at center, and the Jets did very well to get Joel Armia- a Finnish power forward- in the Evander Kane deal. Josh Morrissey's offensive skills makes him the stand-out in a group of solid defenders. In net, Michael Hutchinson and Connor Hellebuyck are both great candidates to eventually replace Ondrej Pavelec.

And let's not forget that at Pick 17 of this mock draft, the Jets selected playmaking winger Nick Merkley with the 17th pick in our mock draft. 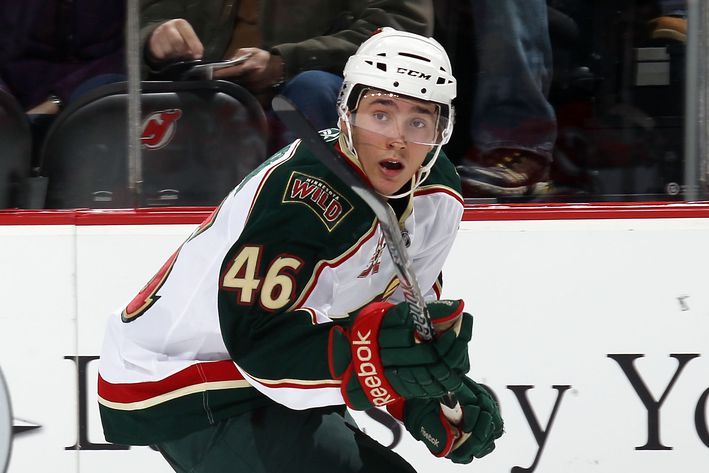 The draft is also a time for the year's biggest trades! Find out why this rumored deal is not a good idea for the Wild!

What else can you say at this point but "Playing in the Central Division Sucks".

But every NHL team has needs, and what I was looking for to bolster the Jets' prospect pool was either a center, or another high-end defenseman to join Trouba and Morrissey. While neither Jansen Harkens or Colin White would be bad picks here, I went with a player whose upside as a defenseman generally doesn't fall this far in the draft. With the 25th pick of the 2015 NHL Draft, the Jets selected Oliver Kylington, a defenseman out of Farjestad in the Swedish Elite League.

Kylington's strength as a defenseman is his skating. Kylington is rated consistently as one of the top skaters in this draft, which enables him to move the puck out of danger and into the offensive zone, where he can create opportunities. In terms of offensive skills, his passing stands out against his shooting (though his shot isn't weak).

Defensively, he's not thought to be spectacular or a liability, which is pretty awesome when you consider he's been playing in the Swedish Elite League since he was 16. What has given scouts concern is inconsistency in his game. His decisions aren't always great, and at times, he can seem unfocused. Your opinion on Kylington as a prospect will likely depend on whether you think his consistency issues are standard from a 17-yo-kid, or red flags signaling a potential bust.

A smart two-way defenseman who has termendous feeling for the game and reads the plays well. Kylington is only only average-sized, but lets your forget the missing inches with his hockey sense, his strong ision, and remarkable skating abilities. Owns a good shot from the blueline and combined with his very good puck and passing skills, he can guide a power play and the team's offensive game to success.- Rafik Soliman, Elite Prospects

Reliant on his skating gifts to cover up on defense. It's clear he wants to be a difference-maker, but should concentrate on a simpler game if he is to continue to develop. Too many questions to be answered about his game-reading ability to be certain he will develop.- McKeen's

He is a high-risk/high-reward player who takes chances but is able to create more offense than he allows. His lateral agility and overall mobility is excellent, but has fallen off this season as there are just too many times he has looked like a liability on the ice. Has the ability to make us scratch our heads in a few years as to why he dropped so low.- Future Considerations

Despite the uncertainty and disagreement surrounding him, Kylington could be the latest in a historic run of excellent first-round Swedish defensemen that includes Erik Karlsson, Victor Hedman, Oliver Ekman-Larsson, Hampus Lindholm, and Jonas Brodin. But despite this potential, his flaws are enough of a concern that he is expected to fall to the bottom half of the first round.

How Would He Fit With the Wild?

The last time the Wild drafted a Swedish defenseman in the first round was 2011, when they selected Jonas Brodin at pick 10. So, I think it's safe to say that the Wild would like a smooth-skating Swedish blueliner.

While the Wild don't seem to have an immediate need on defense now, it bears noting how similar the circumstances are to that 2011 Draft. In 2011, Brent Burns was a year away from his contract expiring, and was in line for a big payday. With the Wild determining Burns would not be in their plans, they moved the skilled offensive defenseman at the draft, and selected Brodin (partially) to fill that organizational hole.

Fast-forward four years. The Wild are rumored to be shopping Jared Spurgeon a year before his contract expires. Might the Wild consider drafting Kylington at 20 if they were planning on trading an offensive defenseman? I think that's reasonable.

While organizationally, defense isn't a huge need, it's never a bad idea to have too many good, young defenseman. Furthermore, Kylington's upside means that he's the kind of "home-run swing" impact prospect the Wild are sorely missing in their farm system.