Share All sharing options for: The Prospect Development Camp Report: Scrimmage One

The annual hockey geekdom that is the open scrimmages, fans were treated to a really competitive game that featured hard hitting and good speed; even some players laying out to block a shot. After all was said and done, Team Green was victorious after winning regulation 4-2 and the added 3-on-3 seven minute overtime session to make the final score 6-3.

Team White featured more of the older prospects - ones that were drafted before last year, in college, or in the AHL - whereas Team Green featured all of the 2015 draft picks and a number of players still in juniors. There was some really good speed as Jack Walker, a camp invite, rang the right post when he streaked in on a lone breakaway. Stephen Michalek, the former Harvard goaltender selected in the 2011 draft, looked good early. A collision in the left corner knocked a glass pane loose and stopped action. Guess who was involved? That's right, the behemoth that is Jordan Greenway.

There was a good crowd on hand to take in the free hockey action. Here are some thoughts on individual player's performances:

Bouramman was paired with Gustav Olofsson for most of the scrimmage. those two played well with each other and did well to keep the puck in the offensive zone. What you'll like from Bouramman is his ability to carry the puck all the way up the ice. he doesn't force the puck up ice via a pass if he doesn't need to. His skating is is good and he is a puck moving defenseman.

Nanne showed very good speed up the ice and some tenacity in the offensive zone. His stick skills need a little work as he gets poke-checked and it kills his momentum. I wouldn't call him a prototypical Wild player, but he can be flashy.

This former Lakeville North grad showed good poise with the puck and stepped in quite nicely against the older competition. He had a couple shots on goal and skates well in the offensive zone. He has his head up constantly and is always looking to get the puck at the net in some way. He fits the mold of mobile defenseman the Wild have been drafting.

Lucia shows how smart he is as a hockey player every time he is on the ice. He just makes good plays with the puck. being the son of a hockey coach will do that to a player. His 6'3" frame helps him in the tough areas of the ice. It would be nice to see him a part of the action a little bit more and take more shots.

When the scouting reports said this kid can skate, they were right. He is a very mobile Mack truck on the ice. His size is striking. He used his large frame to shield the defenders from the puck and made a little one-handed stick handling move to get to open ice. it was pretty awesome. He assisted on Joel Eriksson Ek's goal by crashing the net and creating havoc in front of Kaapo Kahkonen. He kicked it to his left, and Eriksson Ek gathered and scored. Greenway won't be on the score sheet for the Zack Mitchell's goal to open the scoring, but he chased the defender down from behind the net to the half-wall on the right side and created a turnover. The turnover landed on Eriksson Ek's stick and he made the pass Mitchell for the goal. If he can develop some meanness to his game and really be a menace in front of the net, he could develop into something really nice for Minnesota. 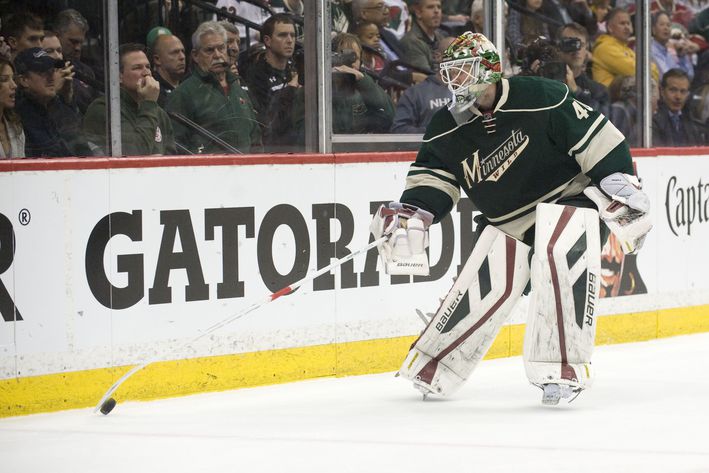 Ger Devine returns to offer his opinions on everything that occurred during the draft and in free agency.

Speaking of Eriksson Ek, the scouting reports of this kid are all true. Being able to see him live was a chance to really appreciate what he does on the ice. He is a two-way forward through and through. There was a turnover at the White blue line and he hustled all the way back into the defensive zone and covered his man all the in. He had another great backcheck to break up a Nolan De Jong chance. He was always around the net in the offensive zone and was always looking to make a play. The more I saw of him, the more I got excited for what he could become. His goal was started by a good play from Jordan Greenway, but it doesn't happen without Eriksson Ek going to the net as well. His line was in the White zone for long stretches of time, which is a good sign for a young guy learning how to play a possession-style game against older competition. Joel admitted that playing on the smaller ice sheet is a big adjustment, but he didn't look lost out there either.

De Jong, drafted in 2013, was a player all over the ice for Team White. He had some really good chances to score. However, it seemed like it took him a while to wind up and shoot. Most of his "chances" were broken up in some fashion.

Duke had a number of solid plays, but was a real catalyst in the 3v3 overtime session. He had two tries at a puck in front of Kahkonen and the second one, from in close, he roofed it over the catching glove. It was a nice goal to cap off a good effort. He had some good hits and didn't look out of place.

This 2015 4th rounder had good gap control and skated well. He navigated the offensive blue line well and moved the puck well.

Jenys scored on a penalty shot. He showed some decent speed, but no afterburners.

This current NHL bubble player worked well with the partner in Bouramman to keep the puck moving north. He helped Team Green own the offensive zone. Gus's skating has always been a strong point of his and there was no reason to suspect that that skill has fallen off. Mobile, solid defensemen are fun to watch.

Mike Reilly is really a whiz in the offensive zone. He just knows where to get the puck and move it around the zone. He made a sweet give and go with Avery Peterson and found Sam Warning streaking down the weak side for the first White goal. The goal was started by Reilly gaining the blue line by carry the puck in. Defensively, he played with his head on a swivel and covered his guy well. He wasn't overly physical, but did make a nice poke-check to tip the puck off Eriksson Ek's stick and then up-ended him in one fell swoop. In the battle of the dopplegangers (Eriksson Ek and Mike Reilly) I'd say Eriksson Ek won this match with a goal and an assist, but Reilly was very close behind by playing a good defensive posture and a creating the first White goal almost single-handedly. Reilly would add another assist when he sent a backhand pass out to the slot where Alex Tuch was camped for a one-time goal. Reilly just has a knack for creating offense, and that will be something the Wild will value as they will give him every opportunity to make the NHL squad.

It took a little bit for Tuch to get going, but he showed up and played well in the second half. His goal to cut the Green lead to 3-2 was good positioning on his part. It was a nice one-time shot where he held off a defender and beat the goaltender from about eight feet above the goal crease in the slot. Tuch was used as the extra-attacker when White tried to tie the game by pulling the goaltender. Tuch was also the only other skater that could match the size of Greenway on the ice.

Ultimately, there are plenty more players that had solid games on Saturday, but there's too many to name. Remember that these 18, 19,20, and 21 year olds are still very young and have time to get better. Things can and will change, so a disappointing performance Saturday does not a bust make. On the flip side, a great performance, while encouraging, does not mean the kid is a future super star.