The Harvard goaltender makes his 25 Under 25 debut and turns pro this year. Hard to say which is a bigger moment in his career.

Share All sharing options for: HW Top-25 Under-25: #23 Stephen Michalek

There hasn't been much room for additional goalie narratives inside the Wild organization over the last couple of years with all the Backstrom can't be bought out, Harding makes amazing run, Harding goes out for the year, the Kuemper rises, look! Bryzgalov!, Kuemper contract talks, Bryzgalov comes to camp, Harding kicks a wall, wasn't Gustafsson a top prospect?, Wild have league's worst goaltending, Dubnyk is acquired and plays outstanding, Harding likely to retire, Kahkonen scores as many goals as Suter, Dubnyk needs a contract, can't buyout Backstrom again kinda stuff going on over the last two years. 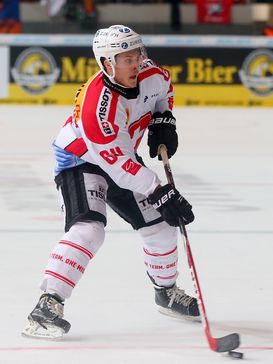 Bertschy is a speedy Swiss center who will be making his debut in Iowa this year.

Even outside of that, a lot of the excitement among fans about prospect goalies has been spent on Johan Gustafsson and Kaapo Kahkonen.

Stephen Michalek seems to have faded into the background at about the time he was involved in the academic scandal at Harvard that took away a year of his NCAA eligibility. The lack of flashy news combined with him dropping down to the USHL for a season in what would have been an important sophomore season (he played 24 games as a freshman, the most he'd play until last year) had very few talking about Michalek.

Michalek appealed his revoked year of eligibility, but the appeal was denied, so he'll be competing with NCAA free agent signee Brody Hoffman for ice time with the hopefully improved Iowa Wild in the AHL.

The Wild's goaltending situation, even in the system, has been tumultuous, with the team deciding not to tender an offer to Alexandre Belanger and Gustafsson departing North America to play in Sweden again, but Michalek has nonetheless earn a spot in Iowa, at least to start the year. He had a strong senior season for the Crimson, posting a .924 save percentage for the second season in a row and starting 37 of 37 games with a 21-13-3 record.

While there were ups and downs, he had some impressive hot streaks, posting four shutouts and maintaining his cool to a 40-save win against Yale in a game that lasted over 96 minutes.

He also set a personal record with a 63-save performance against Jack Eichel and Boston University during the annual Beanpot Tournament in a game that lasted over 82 minutes.

Hockey's Future assess the growth of his game:

Michalek was a workhorse at the prep level and, after some adversity early in his college career, saw loads of ice time in his third season at Harvard. He is beginning to show the promise that first attracted NHL scouts; using his size well and being very economical in his movements while coming up with big stops when necessary.

They're right. Michalek showed up during big games at the Beanpot Tournament and at the end of the season, generally having a strong year on a team that finished sixth in the ECAC. Adding to his strong play in big games was that he seemed, with only a couple exceptions, to amp up his game in tight matches, posting a 2-2-3 record when games went beyond 60 minutes. In those seven matches he had a combined save percentage of .933, a significant step up from his overall save percentage.

This will be a big season for the 22-year-old Michalek, who will have the opportunity to fight for the right to be Iowa's starter. With the possibility that the Wild bring a veteran goaltender into the system for organizational depth, there's a good chance whoever isn't the starter between Michalek and the 24-year-old Hoffman winds up playing in the ECHL for either the Quad City Mallards or the Alaska Aces. A strong start to the season could mean a lot to his year at large.