The Wild looks to lengthen the Blackhawks losing streak

The Wild found their scoring touch on Friday and look to repeat that today against the Blackhawks.

Share All sharing options for: The Wild looks to lengthen the Blackhawks losing streak

With three points and a game in hand over the Blackhawks, the Wild will fly out of Chicago in first place of the Western Conference, but if they want to keep that position for long, they’re going to have to reign their game in.

After a dominating win against the San Jose Sharks, the Wild lost consecutive games in regulation for the first time since last November against the St. Louis Blues and Tampa Bay Lightning. The most prominent issue for the Wild in those two games was their struggle to find the back of the net, but that wasn’t an issue for the Wild on Friday as they scored 7 goals (2 empty net goals) against the Florida Panthers.

After Friday, the Wild now have four players with at least 20 goals, and Mikko Koivu (18) and Zach Parise (16) could also reach that mark before the end of the season. The last time the Wild had more than four players score at least 20 goals was in the 2006-2007 season. Overall, the Wild have the second most goals for in the league up to this point, and they’ll have to keep that up against a dangerous Blackhawks team.

Before losing two straight games, the Blackhawks had a winning streak seven games long against mostly playoff bound teams. Like the Wild, the Blackhawks aren’t going to take a losing streak lightly as they look to rebound against Minnesota today.

While perhaps not as deep as years past, the Blackhawks are still one of the biggest threats in the West this season. The Blackhawks also have four players with at least 20 goals and are still in the league’s top ten in goals for.

Unless the Blackhawks completely fall off in the next few weeks, they are safely in the playoffs and are merely fighting for a better position against weaker opponents. This doesn’t mean they won’t play with any urgency, but it’s unlikely the Blackhawks will play with the desperation that other teams in more tenuous situations have recently.

In the Wild’s last ten games against the Blackhawks, they have a record of 8-1-1, but they have dropped the last two straight games against Chicago. Ultimately, beating the Hawks in the playoffs is more important than any regular season game, but no one will complain if the Wild can pull off a victory today.

Recently, Bruce Boudreau has shuffled the Wild’s forward lines quite a bit as he has tried to find good combinations of players. After Friday’s game against the Panthers, Boudreau said that as long as the lines work well together, they’ll stay together, so we’ll find out today how long they’ll last.

The Central Division and Western Conference regular season titles won’t be decided today, but with essentially a four point shift in the standings, today’s game could have a meaningful impact on either team’s chances to win those titles.

For the Wild, Christian Folin is still out for another couple of weeks with an arm injury, and Gustav Olofsson looks to still be injured with an upper body injury.

Meanwhile, Scott Darling has a hand injury and won’t be backing up Corey Crawford for the Blackhawks.

Today’s Gamethread will be up at 11:00 AM, so we hope you’ll join us for the game! Thanks to Daily Faceoff for the projected lineups below and our own Kine for the Tale of the Tape! 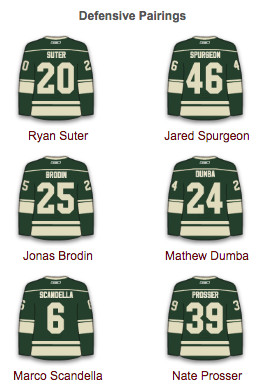