It’s a little too early for a 2017 Draft Preview, but it is time for a bit of a history lesson. As of today, the Minnesota Wild have no picks in the first or second round of this year’s draft. Instead, the Wild are going to have to look for some depth on a cap-strapped team in their system at Iowa or in the final five rounds of the draft where Minnesota has 6 picks (84th, 97th, 115th, 146th, 177th, 208th). Looking at Chuck Fletcher’s recent drafts (since being hired in April 2009), the late round picks have yielded some decent depth-NHLers; when compared to other GMs who have been around since 2009, Fletcher has had better success at finding NHL talent than most. 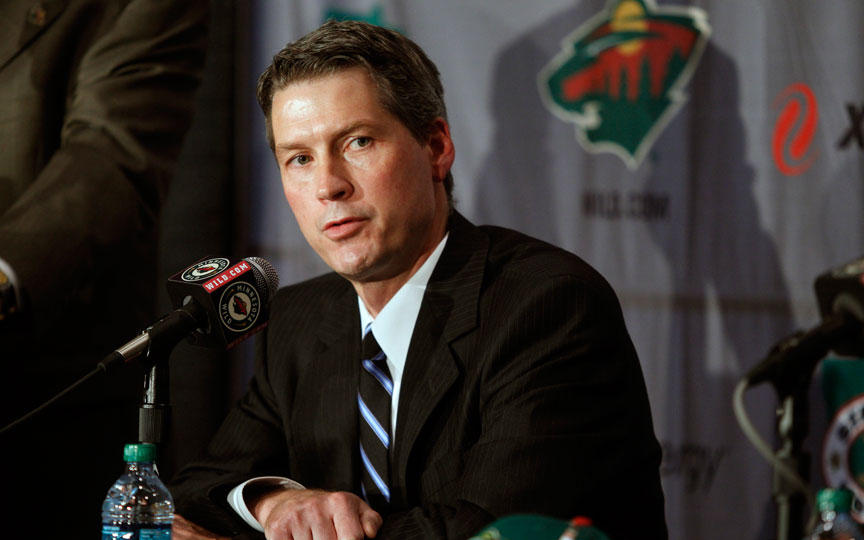 Since Minnesota isn’t drafting in the first round, I’ll save you the headache of going into depth about Fletcherian bungles like Nick Leddy (498 games played; 0 for Minnesota) and Zack Phillips (0 NHL games played, received in Brent Burns deal). Of the 2016-17 roster, two players came from late rounds: Darcy Kuemper (6th Round) and Erik Haula (7th Round). If you’re a fan down in Des Moines, there are more names to be added: Nick Seeler (5th Round), Steven Michalek (6th Round), Tyler Graovac (7th Round), Christoph Bertschy (6th Round), Kurtis Gabriel (7th Round), Carson Soucy (5th Round), and Dmitry Sokolov (7th Round).

Seeler and Michalek both just finished their first full professional seasons, both were drafted in 2011. Michalek is coming along nicely, providing back-up security for Alex Stalock who will most likely be Minnesota’s number two when Kuemper leaves to test the unrelenting waters of free agency. In 30 appearances with the Iowa Wild, Michalek teetered around the .500 mark (13-14-3) posting a 0.919 save percentage and a 2.63 GAA. Nick Seeler, a Minnesota native, saw action in 57 games for the Wild this season, mostly bouncing around the 2nd and 3rd defensive pairings, tallying five assists and a -10 in plus/minus on a team that gave up the third most shot attempts in the AHL. With Olofsson (if re-signed) and/or Reilly set to make the Wild’s roster out of training camp next season, Seeler will most likely have to move up the depth chart and play alongside Fortunus or a (hopefully) healthy Mike Weber.

Graovac spent the majority of last season playing as Minnesota's fourth line center while Christoph Bertschy and Kurtis Gabriel each played up in the NHL intermittently. In 52 games playing in a depth role, Graovac posted nine points (7G/2A) while winning less than half of his faceoffs (47.5%) but averaged a hit per game, something expected from a player that stands 6’5", 212. He spent the latter half of the season buried in Des Moines in favor of Joel Eriksson Ek, who saw limited action this post-season. Gabriel stood out in his NHL stint as being a penalty magnet, taking 29 penalty minutes in 13 games played while being limited to less than 6 minutes of ice time per night. Soucy and Sokolov played a combined five games in the waning days of the AHL season with Iowa being eliminated from the Calder Cup playoffs.

In examining Fletcher in comparison to other General Managers around the league, he stacks up pretty well in terms of finding NHL talent. Of 31 NHL franchises (hello, Vegas!), only 15 of them have taken hand in a draft as early as 2009. Through this season, 17 players drafted under the Fletcher regime have played NHL minutes; 8 of them have played more than 100 games in the NHL. 100 is being used as the benchmark here simply because the century mark is a nice round number. Playing one minute in the NHL is a success to me, but when looking at players like Tyler Cuma, a Reisbrough guy, busts happen.

11 other GMs have played more players in the NHL, but then you have to take into account the strength of the franchise. What is important is the "success" benchmark of 100 games. When you take into account a success rate versus the amount of players thrown into the fold, nearly half of Fletcher’s picks have stuck in the NHL (0.47). Only four other GMs have drafted better: Doug Armstrong (0.54), George McPhee (0.53), Bob Murray (0.52), and Stan Bowman (0.48). Bob Murray in San Jose definitely steals the show with 25 draft picks dressing either for the Sharks or somebody else and 13 of those players playing in 100 or more NHL games (tops in both categories for the eligible GMs here).

If you want a "way too early" mock draft, here is where Minnesota stands per the NHL.com draft prospectus for best available players in North America, which is overwhelmingly stacked with left-wingers this year:

If I was in Fletcher's shoes, I'd start by looking at defensive depth. Louis Belpedio, a former third round pick, remains unsigned. Gustav Bouramman, who will be 21 next season, was one of Minnesota's "black aces" this post season but has yet to log a professional minute. Pavel Jenys and Dylan Labbe spent last season playing with the Quad City Mallards of the ECHL, but have seen little to no time in the AHL. With a bevvy of offensive prospects either in the organization or soon to be, the blue line is always important in protecting Steve Michalek who will be stepping in on a team that gave more shots than 27 other AHL franchises.