The Wild winger might be streaky, but he is a crucial part to this offense every night.

After a slow start to the season, Kevin Fiala has finally gotten into a groove. He has scored six goals in his last eight games and hasn’t missed a step despite the extended layoff. It’s been a rough few weeks for the Wild but with Fiala rolling getting back up to NHL speed will come naturally.

At 24 years old, Fiala has established himself as one of the better shooters in the NHL. Despite being extremely streaky Fiala’s found a way to become the most important component to the Minnesota Wild’s offense (sorry Kaprizov fans). He might not dazzle opponents with his skating every night but his ability to score the puck from anywhere opens up a ton of time and space for his teammates.

Typically the Wild focuses on their defensive approach and trying to attack their opponents in transition and on the rush. Nevertheless, when Fiala is on the ice their concentration shifts to getting him the puck in the offensive zone. In the 2019-20 season, the left-handed winger ranked first in offensive zone start percentage (62.95%) and, relatedly, third last in defensive zone starts per hour (6.43) at 5-on-5. Essentially, whenever Minnesota knows they are getting possession in their opponent's end you can bet that Fiala will be deployed onto the ice.

Not only can you justify this type of usage with his raw point totals, but his overall shot selection is also something every skater should try to replicate. For more context check out his shot location spray chart at 5-on-5 in 2019-20 from HockeyViz. 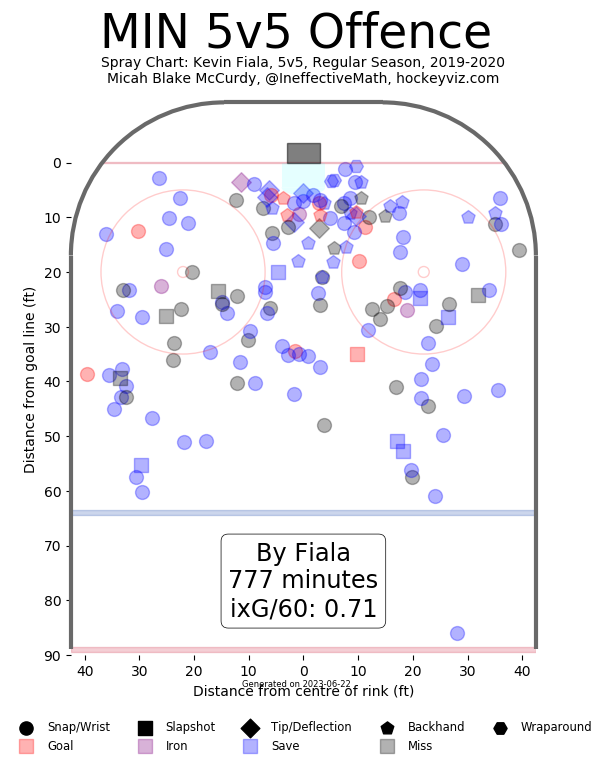 As you can see despite being a lefty Fiala does a great job of using a variety of different angles to score goals. In addition, the bulk of his offensive output comes from the dangerous areas in front of the crease. His finishing ability combined with his nose for the slot area make him a luxury in today’s league, especially for a team like the Wild.

During Fiala’s brief, yet exhilarating career in Minnesota one thing has become clear. If he’s racking up points the Wild are likely climbing up the standings. He’s only been on the team for 94 regular-season games but the correlation between his on-ice success and their ability to win games is hard to ignore.

Last season was an interesting year for the Wild. As of Feb. 3, the team was on the outside looking in at a playoff birth with a 23-22-6 record and just squeaking by with a .510 points percentage. Their 2.39 xGF/60 at all strengths ranked in third lasst in the NHL. Fiala was seventh on the team in goals/60 (0.81) and only averaged 14:32 of TOI. It seemed like Minnesota was dead in the water and doomed for an epic collapse. However, after an impressive two-goal performance, the following night against the Chicago Blackhawks, Fiala and the Wild’s season started to turn around.

Over the course of the next 17 games, the Wild went 11-5-1 and recorded a 0.676 points percentage. In addition to the wins, they raised their xGF/60 to 2.61 and ranked in the top-five in terms of GF/60 (3.42). And while you can credit things like hiring Dean Evason and trading Jason Zucker for their success, the biggest factor was trusting Kevin Fiala with a bigger role.

Even though the this season is short, it’s still in the early stages for the Wild. And judging by Fiala’s play recently moving up in the standings shouldn’t be that difficult. Keep an eye out for the Wild to follow Fiala’s lead the next few weeks while the team tries to gain speed after a sluggish start.

The data in this article is from Natural Stat Trick.