Wild Defense in the Regular Season and Post-Season

I do my best GerDevine impression and break down some wild D-men performances in the regular season vs. the post-season.

Share All sharing options for: Wild Defense in the Regular Season and Post-Season

I thought it might be worth taking a look at the general performance of the Wild's defense in the regular season vs. the post season.

Before we get to that, HUGE shout out to ExtraSkater.com - they are the go-to place for any fancystats you want to know about. Also, a big thanks to Ger for taking a look and giving me some pointers.

First, let's take a look at how our D-men were used during the regular season

This is showing Quality of Competition on the Y-Axis, and Offensive Zone Start% on the X-Axis. In other words, the hardest minutes are the top left corner, the easiest are the bottom right. A blue dot is a positive CorsiRel value, and a red dot is a negative, with the size showing how positive or negative it is. In all of these usage charts, I've limited to showing players who have played 10 or more games. 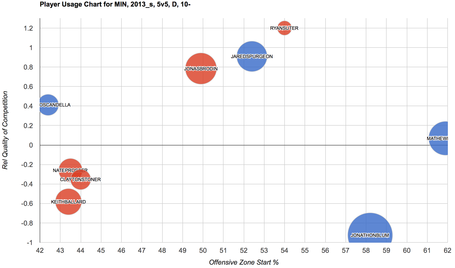 As we can see from this, Suter and Spurgeon are playing the toughest opponents, but tend to be getting a lot of starts in the offensive zone. Brodin isn't far behind in QoC, and is very even with them in terms of zone starts. Scandella is on his own in the middle of the chart in terms of QoC, Prosser, Ballard, Stoner, and Dumba all of played very similar minutes in terms of who they were on the ice with (though Dumba had significantly easier zone-starts). Blum played the easiest opponents with relatively easy zone starts, which may account for how great he looked in his 15 games. Generally speaking, I would say that Blum and Dumba had the most sheltered minutes- Dumba because he started primarily in the offensive zone, and Blum because he had a very low QoC.

Now let's take a look at these same players' Corsi and Corsi-Rel values.

Corsi Values, and Other Stats

I have limited the following charts to 5v5, and limited to 8 games played

Of all 9 defensemen who played 8 games or more, only Blum, Dumba, and Spurgeon had positive CorsiFor% (meaning only they had more shot attempts taken for the Wild than against while they were on the ice at 5v5). The rest all have varying degrees of negative CF%

What is of more interest, however, is the CF% Rel- or how each player affected the team's Corsi%; for Blum and Dumba, heralded as offensive defensemen of the future, and both playing sheltered minutes, it makes sense that their CF%Rel is very positive. The same is true for Spurgeon, who posted a CF%Rel of +3.1% in tough minutes. What is concerning about this chart is Brodin- his CF%Rel is a team-low -3.2%. In other words, when Brodin was on the ice, the Wild had a lower percentage of shot attempts than with any other D-man.

Out of curiosity, I looked up Tyson Barrie's stats to look at them compared to Jonathon Blum's. While Blum only played 15 games, and Barrie played 64, it's interesting to note that Barrie's Corsi was 50.2%, while Dumba's was 54.5%. Blum's CF% Rel of +7.6% is almost double Barrie's of +4.9% as well.That's very exciting if Dumba can hold that over a full season, as it means Dumba could bring a whole new threat to our enemies.

Over the course of the season, the players playing the toughest competition were Brodin, Spurgeon, and Suter- not surprising, really. What's also not surprising is that of those three, Spurgeon produced the most offence, followed by Suter, and then Brodin. Scandella, while not usually facing the same quality of opponents, had very heavy defensive zone starts, which led to him facing roughly the same number of shots as Spurgeon. Now let's take a look at the defense's usage and numbers in the series against the avalanche (so far).

In the same, way, let's look at their usage, and then their statistics. Then, we'll compare them to the regular season.

Unfortunately somekindofninja.com does not have post-season usage charts available yet. In this chart, Y-Axis is TotTm% QoC* and X-Axis is offensive zone start percentage (same as above). In this chart, however, the color is their CF% value, rather than CF% Rel, and size is ice time. 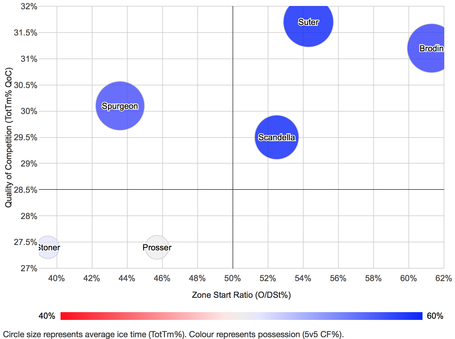 *This is a Quality Of Compeition metric based on TOI that is used by Extra Skater as opposed to the traditional Corsi-based Quality of Competition. In other words: "Quality" in this chart means "lots of time on ice" rather than "good Corsi values."

The first thing I see here is that the dots are not grouped nicely. This is likely because of the small sample size (only 6 games) and the fact that the top two pairing have been swapped around a bit, so every difference in QoC is emphasized. Suter is facing the highest QoC, followed by Brodin, Spurgeon, and Scandella. After Scandy, there is a huge drop before Prosser and Stoner are pretty even. Suter, Brodin, and Spurgeon had more offensive zone starts, while Stoner, Prosser, and Scandella had more defensive zone. Lastly, all but 2 players have a very positive corsi value. Only Stoner and Prosser have a negative value, and both of theirs are very close to even.

Well, most obviously, our defensemen have uniformly been on the wall for more shots FOR us than AGAINST us than in the regular season. Again, the Avalanche don't play a possession game. While at first glance it appears Scandella is playing all the defensive starts (and he is playing a majority), remember that the small sample size emphasizes differences, so the gaps aren't really as wide as they seem. Stoner and Prosser are playing slightly sheltered minutes in that they are facing the lowest QoC during these playoffs, probably meaning that Yeo is trying to avoid them facing Colorado's top line. In short, not much as changed in how our defensemen are being used.

What this means is that our defensemen are doing a better job against the avalanche at keeping them from shooting, and getting the puck back into the offensive zone than they did on average over the regular season. That goes back to the Avalanche being a bad possession team. Have you noticed it seems like any time the Avalanche get into our zone for any extended period of time it seems like they're on the verge of scoring? Our defensemen are keeping us in this series by taking the puck away and not letting them get shots on net.

Corsi Values and Other Stats

Notice that all of our defensemen have a CorsiFor of 50% or better. This means one thing: we are out-possessing the Avalanche pretty heavily at 5v5. This means that, no matter which defensemen is on the ice, we are taking at least 50% of the shots, and probably more. This explains why www.extraskater.com recognizes the Wild as the top possession team in the playoffs. In terms of the defensemen's CF%Rel (how each player affects the team's Corsi%); while Scandella and Suter have a phenomenal 7.5% and 5.7% respectively, Brodin's is a measly .7%, and Spurgeon's is -.4%. Stoner and Prosser have a miserable CF%Rel also- Stoner is at -8.2% and Prosser is at -9.6%.

These are exaggerated by a small sample size of merely 6 games, but look back up at the usage chart from the regular season: Spurgeon has been our main possessiong-driving defensemen all season long, and the team is taking fewer shots with him on the ice than with Scandella, Suter, and Brodin. Scandella is, mathematically speaking, most benefiting the team in terms of generating more chances to score, in that we take more shots with him on the ice (at 5v5) than with any other defensemen.

Scandella, who for the regular season was taking primarily defensive-zone starts, has been used in a slightly more offensive role. This has lead to him being on the ice for 4 Wild goals, but 5 Avalanche goals. That's not good; during the regular season, Scandella was not producing as much offense, but he was also on the ice for more goals for than against. His CF% was negative, but his CF%Rel was positive. In other words: Scandella was not taking very many shots, but the Wild team as a whole was. Since the playoffs began, Scandella has continued taking shots, more than the regular seasons, Indeed, he has become a mainstay of our offense from the blue line. But in the process, he has sacrificed stopping shots, which is costing the Wild goals.

Spurgeon, on the other hand, has bottled himself up. During the regular season, his CF%Rel was 3.1%- the Wild were taking more shots with him on the ice than off. During this series, it has dropped to -.4%- Spurgeon's presence means the Wild are less likely to shoot. That is problematic for our best offensive defensemen (outside of Blum and Dumba, who simply aren't ready for the playoffs). Spurgeon's save percentage has also dropped slightly, but not enough to indicate a problem.

Good question. The stat that tells the tale here is CF%Rel, which again is how each player affects the team's CF%. Scandella has continued producing at roughly the same rate, but Spurgeon has dropped off. Spurgeon's CF% has increased, but his CF%Rel has dropped; the team as a whole is producing fewer shots with Spurgeon on the ice than during the regular season. Oddly enough, Spurgeon and Scandella's zone starts have reversed; where Spurgeon had a majority of offensive zone starts during the regular season and Scandella had defensive zone starts, those have swapped.

To make a long story longer: by all measures, this series should be over. The Wild have, as a group, absolutely controlled possession. A hot goaltender has hurt us, and we certainly haven't been helped by our most offensive defensive not being offensive. We have also been hurt by turnovers in bad areas, and the ability of the Avalanche to take advantage of them.

This is both encouraging and discouraging. On the one hand, we are struggling to produce goals. On the other, statistically speaking, the best teams in the league have good possession numbers, and in this series we have done that. We need to stop making bad turnovers, and Spurgeon needs to return to form when he was really driving our possession, but there's little statistical evidence that we should be losing this series.

Through all of this remember: the above numbers are all based on 5v5 play, where the Wild have outscored the Avalanche 11-8 through the series. When the Wild get shorthanded (be that 5v4 or 6v5) is where the Lanche are really hurting us. Nothing new there: staying out of the box gives us the best chance for success.

In any case: it's been a good back-and-forth series so far. Hopefully Spurgeon can find his possession hat again, and we can connect with the twine.