The Wild continue their road trip with a visit to ex-divisional rivals the Calgary Flames. Read on for all the gameday info you need. Also, Hayley Mutch from Matchsticks & Gasoline has stopped by to give us some info about how the Flames season is going.

1) The Flames have been on a nice run lately, winning 5* consecutive games (beating the Sharks and Blackhawks in the process), how do Flames fans feel about this? Are they excited, optimistic or just annoyed that the team is ruining their chances of securing a top-3 pick in this year's draft?

Unfortunately it's only four, but we'd happily accept a fifth straight win at the expense of the Wild tomorrow night! I think most fans are excited about the winning streak, we had a rough go of things in late December and early January when the Flames were shutout in five of seven games and wins were few and far between, so this recent change of fortune is very welcome.

Given the Flames' overall lack of scoring this season it would be unreasonable to expect them to continue putting up four goals per game against some of the best teams in the league, but it does give us a reason for optimism to see some of Calgary's good young players outplaying guys like Jonathan Toews and Joe Thornton.

Sadly there is a portion of the fanbase that is actually annoyed that the Flames are winning because they feel it's compromising their draft position, which I think is absolutely pathetic, but to each their own. I understand wanting what's best for your favourite team in terms of securing a quality draft pick, but if you can't be happy when your team wins a few games then what's the point?*

2) Do you think the Flames were right to keep Sean Monahan in the NHL this year? How do you rate his potential?

I really don't know what the right move with regard to Sean Monahan was this season, and I was one of the few people who didn't really have an opinion either way when he reached the nine-game limit earlier this season. There have been times when he has struggled this season and has been rendered invisible, but he's also leading the team in goals, so it's pretty difficult to argue that the Flames are doing an injustice to him by not returning him to junior.

Given how he has performed so far this season on a team with very little star power, I think he certainly has potential to be a top-six centre in the NHL sooner rather than later in his career. His game against the Sharks was particularly impressive. While he hasn't necessarily show himself to be much of a playmaker thus far, he's fast and strong and he works hard to get to the front of the net, which he was rewarded for last night.

3) I've heard a lot of hype surrounding Mikael Backlund's recent play and, looking at his stats, I couldn't believe he is still only 24; do you think the Flames should be looking to move him for a big return, or rebuild around him?

It's hard for us to believe he's so young as well! Flames fans have been waiting for a long time for Backlund to mature into the skilled and defensively responsible top-six centre he is now; Backlund has had and still has his critics who are frustrated by what they perceive to be his inconsistent effort, amongst other things, but he also has a sect of loyal fans who have been watching his underlying stats carefully and preaching patience with regard to his development over the past few years and it appears to have finally paid off!

As a player who is now third in team scoring and playing 20 minutes per game, his trade value has arguably never been higher, but as a young player who can score, drives possession and doesn't come with a huge price tag (yet), Backlund is also extremely valuable to the Flames going forward in the rebuilding process, and I think most people (including me) would like to see him stick around.

4) Who are the most likely candidates on the Flames to be traded away at the deadline?

Mike Cammalleri is a player whose name has come up in conversation regarding trade rumours on multiple occasions so far this season, although the fact that he is coming off a concussion might scare away some potential suitors.

Lee Stempniak, who will be a UFA after this season, is another potential trade target for playoff-bound teams looking to add depth. Both player could potentially secure the Flames a first or second-round pick in this year's draft in return, which is hard to turn down if you're Brian Burke, but keeping older guys like Cammy and Stempniak around during a rebuild is important as well.

5) Flames prospect Markus Granlund is the brother of the Wild's excellent young forward Mikael Granlund; can we expect Markus to be a fixture in the NHL anytime soon?

Markus Granlund is having an excellent season in the AHL with the Abbotsford Heat and has been on an absolute tear recently when virtually everyone else on the team seems to have forgotten how to score. He has 18 goals and 31 points in 40 games so far and is third in team scoring.

I haven't seem him play much with my own eyes, but by all accounts he sounds like a pretty good player. He was briefly called up by the Flames in December but didn't end up playing, so I hope he gets a call-up again before the end of the season so we can actually see him in action!

6) With the franchise currently rebuilding, what do you see as a realistic date for the Flames to be able to field a competitive team again?

It's difficult to say. The Flames certainly have some of the pieces in place en route to becoming a competitive team again but there are also huge holes to fill like a bonafide top-six and a number one goalie.

Some of the prospects in the Flames' system could very well fill those holes within the next few years, but it will take a few years at least before the likes of Jon Gillies, John Gaudreau, Morgan Klimchuk, etc. are ready and can make a difference at the NHL level. So, barring some divine miracle, I would probably have to say it will be at least three years before the Flames are seriously competing again.

Thanks to Hayley for giving us her time. Make sure to go say hello the community over at Matchsticks & Gasoline at some point, and check out a couple of good articles here and here. Also, don't forget to read the Q&A Emilie did over there today. 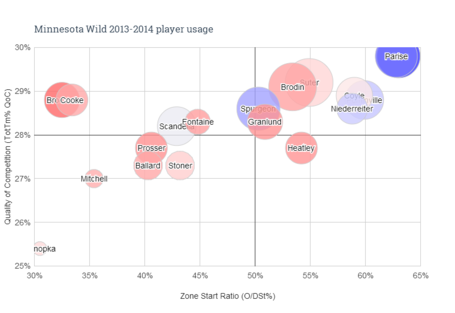 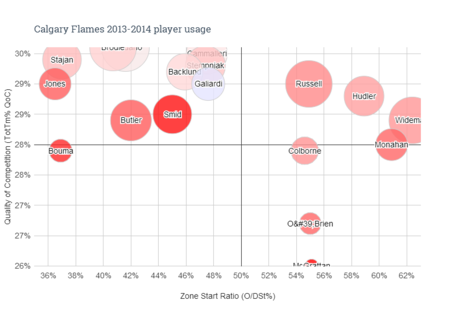 Puck drop tonight is at 9.00 PM. Check back here later for the live gameday thread and get involved in the conversation!