"Wild About Numbers": Does Justin Fontaine Have A Part To Play In The Wild's Long-Term Plans

Justin Fontaine has really grabbed the headlines after becoming the first Minnesota Wild player to ever score a hat-trick in his rookie season. But does he actually have what it takes to become a part of Chuck Fletcher's long-term vision for this team?

Share All sharing options for: "Wild About Numbers": Does Justin Fontaine Have A Part To Play In The Wild's Long-Term Plans

Fontane's road to the NHL has been somewhat rocky. After a stellar college career with the UMD Bulldogs, including an NCAA Championship win in 2011, he signed with the Houston Aeros as an undrafted free agent. In his two seasons with the Aeros he scored 111 points and was the team's leading scorer in 2012/13. During those two seasons he never received a call-up to the Wild. Even in 2011/12 when pretty much every single Aeros player was called-up at some point, Fontaine was always overlooked. This may have been due to the controversial Twitter incident he was involved in during February 2012 which earned him a 2-game suspension from the Wild.

He was an RFA during the 2013 offseason, and was given a new 1-year, $600,000 dollar contract. He would require waivers to go back to the AHL so it became clear that he would be given a chance to earn a spot on the Minnesota Wild roster. It's easy to forget how little faith we had in him making the team back then. The comments section on this article by Eric show that most of us thought he would start the year in the AHL and be a call-up, or else be traded.

The main knock against him succeeding in the NHL was his lack of size and the sheer volume of young forwards that the Wild possessed who all seemingly had much higher upsides. What he had going in his favour was a knack for scoring goals, positional versatility and the kind of offensive mind-set that the Wild have sorely lacked for years.

Fontaine ended up surviving the final roster cuts probably due to Mike Rupp being placed on IR for the start of the season and made his NHL debut on opening night at home against the Kings as a 25 year old rookie. He began the year on the 3rd line playing a tough minutes shutdown role with Kyle Brodziak and Matt Cooke. Though he is a natural goalscorer, his defensive game was improved during his time with the Aeros as he often played that defensive 3rd line role with Carson McMillan and Dave McIntyre. While he has spent most of his time up to now on the 3rd line, he has also played a few games on the 1st, 2nd and 4th lines, as well as featuring on the powerplay and also being a healthy scratch a few times.

Something he has done consistently this year is score goals no matter what role he has played in. His 11 goals put him 3rd among Wild players. But is his all round game good enough for him to be a long-term part of this Wild team, or will be end up as a trade piece or on waivers back to the AHL in the future? Right now, scoring goals will keep his place on the team pretty safe, but looking to the future, the Wild have dreams of signing Thomas Vanek in the offseason, and have a wealth of forward prospects coming through the system, meaning places in the top-6 will be tough to come by. As a goalscorer, if there is no place for him in the top-6, then Fontaine becomes a lot less valuable. While he has shown he can survive in a defensive role on the 3rd line, I don't know if that role really suits him at this level. One idea could be for him to play on the 4th line to provide some depth scoring, but that is very much dependent on what kind of 4th line the coach will want to deploy.

-To get a better idea of how Justin Fontaine is performing in all aspects of his game, let's take a look at his numbers, starting with his basic "boxcar" stats:

-Next, let's look at his production rates and where he ranks among Wild players (25% of games played) in all situations and also just at even-strength:

-Now that we know he is productive, let's see how sustainable that production is:

-Now for his 5v5 possession numbers and on-ice percentages:

-To get a better idea of his role in the team, let's look at his deployment statistics: 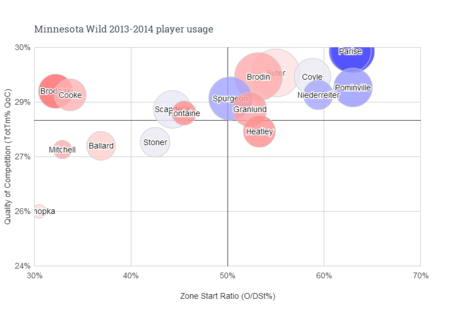 -Finally, here is a list of how much TOI he has had with each Wild forward at 5v5 this season:

I think Fontaine still needs to do more to prove that he can be an important part of a Wild team that is hoping to be challenging for the Cup within the next few years. Right now it's hard to gauge what his potential is. He could be playing a role for the Wild next year, he could be dealt somewhere else as part of a bigger trade, or he could be back in the AHL if his scoring slumps. It's hard to say right now.

He's still only 39 games into his NHL career, and though he is 26 and fairly far along in his developmental curve, I think we will have a clearer picture of what his future holds by the end of the season. What I want to see from him going forward is; some more assists, to keep chipping in with goals here and there, to improve his defensive play and try to become a more well rounded player as opposed to just a goalscorer. He needs to get better at winning puck battles along the boards and be more of a factor every shift, which hopefully will come with experience.