Is Jonas Brodin Starting To Emerge From His Sophomore Slump?

Jonas Brodin's struggles this year after being so dominant in his rookie season are old news at this point. But is he starting to turn it around and get back to his best?

Share All sharing options for: Is Jonas Brodin Starting To Emerge From His Sophomore Slump?

When Brodin broke into the NHL last year as a 19 year old, he performed at a level that even the most optimistic fan would never have thought possible. He was solid as a rock on the top pairing alongside Ryan Suter and his elite skating, great positional sense and nerves of steel were on show game after game. After those 45 excellent regular season games (and 5 not so great playoff games) he came into this season under the weight of huge expectations. Fans wanted to see him continue to transform into an elite defenceman. Unfortunately, things didn't quite go to plan...

The young Swede struggled to find his feet early in the season. He seemed to be under more pressure when the puck was on his stick and often made bad decisions as a result. He wasn't playing with the same calm dominance that he had enjoyed the previous season and it resulted in him being demoted from the top pairing numerous times during games as Mike Yeo tried to take him out of the firing line. Jared Spurgeon's injury has resulted in Brodin returning to his usual spot on the top pairing beside Suter.

It's not that big of a deal for a young player to struggle in their second season (the term "sophomore slump" exists for a reason) but I feel that it's important to look a bit closer at Brodin's performance now that his 45-game sample of great play from last year has been out-weighed by a 48 game sample of not-great play this season. Which sample is the truest indicator of his potential, and which way is his performance trending this year after a rough start?

Let's try to find some answers in the numbers. For the following analysis, I've set the criteria as "Wild defencemen who have payed 25% of the season so far", which leaves 8 players for this year's numbers, and 7 for last year.

-Firstly, here are his basic splits between last season and this season:

-Here are his scoring numbers, with the same criteria as the previous table:

So we've established that Brodin's overall performance has been disappointing compared to last year so now let's see if his performance this year is trending in the right direction. 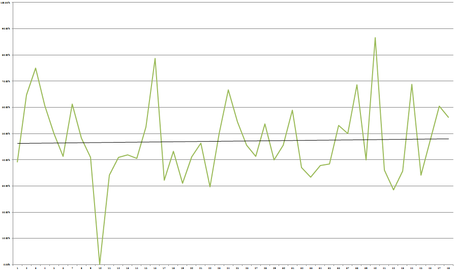 -Here is the same type of graph, only this time with Brodin's CF% relative to his teammates: 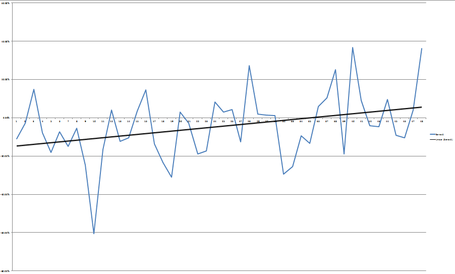 With Spurgeon out hurt, Brodin couldn't have picked a better time to start finding his game again. Hopefully, once Spurge is back in the fold, Brodin continues to trend in the right direction for the rest of the season. I think last season was a glimpse at his true potential and he isn't far from returning to that level of play, he just needs to regain his confidence.

Now that he is finding some form, one would think that when Koivu, Parise and Spurgeon (the team's two best puck possession forwards and best puck possession defenceman) return to the team, it will make things even easier for him. If he's able to play well while the Wild have been extremely depleted, he should be able to play even better when the team is fully healthy, now that he is looking a bit more like his old self.

I'll be keeping a close eye on Brodin for the rest of the season to see if he can show everyone why his nickname is "Kidstrom" and not "Kidlicky".