[Wild About Numbers]: Defensive Production at 5v5 in the Mike Yeo Era for the Wild vs the Rest of the NHL

A lack of production from defencemen was often highlighted as a major issue for the Wild during Mike Yeo's first couple of seasons as head coach; are those issues now a thing of the past?

Share All sharing options for: [Wild About Numbers]: Defensive Production at 5v5 in the Mike Yeo Era for the Wild vs the Rest of the NHL

Firstly, here's a table showing, for each season of Mike Yeo's tenure, the number of defencemen who dressed in the regular season, the total points they scored, the number of them that were primary points (goals and 1st assists), the total 5v5 time on ice of the group, the 5v5 Points per 60 minutes and the 5v5 Primary Points per 60 minutes for all the defencemen combined:

..and just to outline the key numbers from that table: 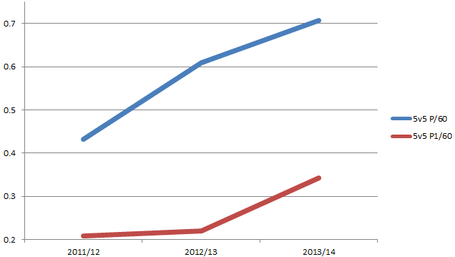 -Next, let's look at the 5v5 production for the Wild's individual defencemen (at least 50% of games played) from each of the last 3 seasons:

-Here are each of the individual seasons from the tables above ranked by P/60:

P.s. I had to manually calculate a lot of the numbers in this which took a long time and was tedious, to say the least so, for future reference, does anyone know a site that keeps track of points-scoring by position at team level? If so, send me a link.