Suter's poor underlying numbers have been something of a controversial topic around here at times over the last year or so. I've decided to take a closer look at them to see if I can figure out whether or not they are justified or if he is just flat out under-performing.

Below are two player usage charts showing each of Ryan Suter's seasons from 2007-08 (his 3rd year in the league) up to the current season. The bubble colour indicates positive (blue) or negative (red) Corsi relative to the rest of his team. The bubble size is the amount. The X-Axis indicates "Offensive Zone Start%". The Y-Axis represents "Quality Of Competition" in the first chart and "Quality Of Teammates" in the second. 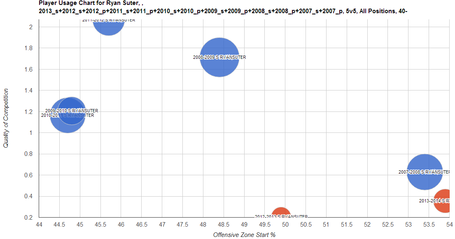 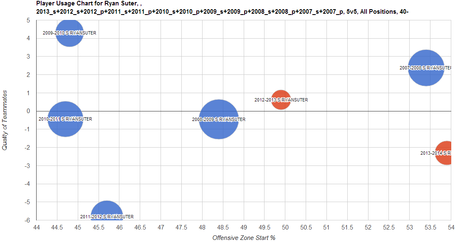 -Here's a player usage chart for the Wild's defencemen this season: 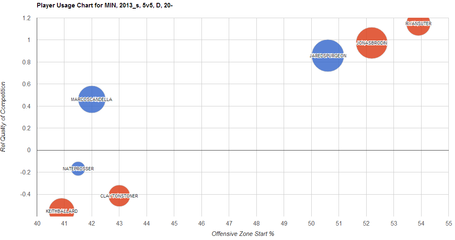 -To get some more perspective, here's Suter's usage this season compared to every other d-man in the league (55+ games played): 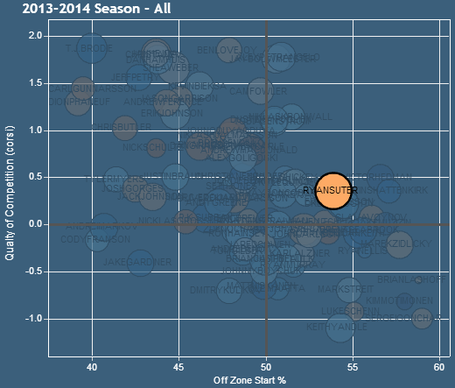 -Here is that chart zoomed in so you can see who else is deployed in a similar way to Suter: 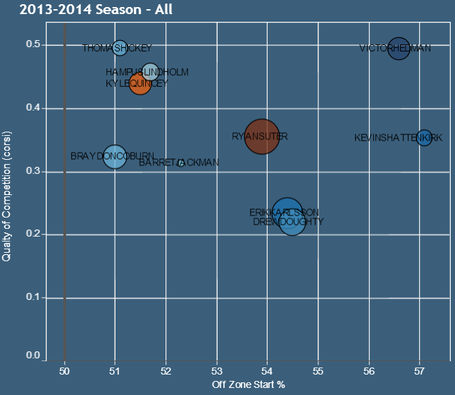 Over the last two seasons, Suter has spent most of his time with Jonas Brodin and when he hasn't been paired with the young Swede he's been with Jared Spurgeon. Last year, Brodin was amazing and made life a lot easier for Suter as they got into a good groove together. This season, Brodin has struggled defensively and was eventually demoted to the 2nd pairing, with Suter and Spurgeon as the 1st pairing.
-Here are the Corsi For% numbers for Suter with and without Brodin and Spurgeon over the last two seasons: 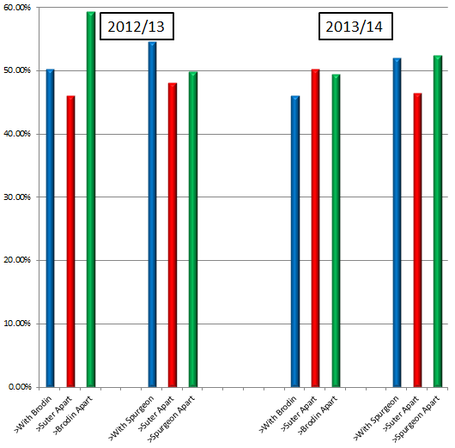 -Here is Suter's total TOI/G and in various situations from the last 7 seasons:

-Here are Suter's scoring rates overall and at even strength in each of the last 3 seasons:

There was an interesting point raised by ThatGuy22 in a thread a while back that went like this:

Suter plays a positional hockey game. His goal is to let the shooter come to him, and keep himself between the shooter and the goalie. He is perfectly happy to let shooters take long range shots, as long as they don't get into a decent scoring position to do it. It saves energy allowing to play half the game, but does a number on his Corsi/Fenwick.

Arguments against Corsi based around shot quality have been researched and disproven many times, but these normally focus on the a team level, so this concept regarding individual players is very interesting and warrants further attention.

The numbers at the time backed the theory up somewhat, with Suter allowing a lower percentage of close range shots than some other notable NHL defencemen. The issues of course were sample size, the possibility of it just being randomness and whether or not this tactic was actually producing positive results in terms of stopping the other team scoring goals and helping the Wild to do so at the other end of the ice.

I decided to look a bit further into this, so I looked at the average distance of shots allowed while Suter and 49 other defencemen were on the ice over the last two seasons. I discounted shots from 30 ft or greater because these outliers would skew results.

-Here are the 50 defencemen this season and last season ranked by average shot distance allowed (This is road data only to minimise noise created by scorers bias):

-Just to illustrate the point, here are the top-15 defencemen out of this group in average shot distance allowed and the correlation between the average distance of shots they surrender and their Corsi relative: 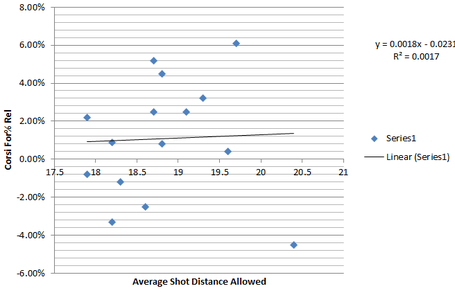 -Here is the two year average for shot distance against and opposition Sh% for the 50 defencemen: 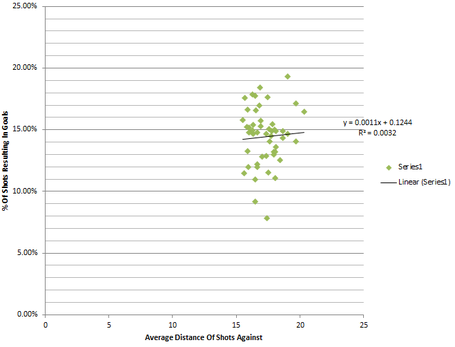 Let's say Suter is employing a technique of allowing shot attempts against but preventing quality scoring chances, then surely the positive effect of this technique would show up in his numbers compared to the rest of the Wild defence.

I've gone into as much detail as I can on this. I can't say for sure that Suter's poor puck possession numbers aren't a result of some kind of shot quality-limiting technique, but I have reason to believe that is not the case. A key thing to consider is that he posted excellent numbers in Nashville so, unless he drastically changed something technically when he arrived in Minnesota, he could just be underperforming or suffering from not playing beside an experienced elite defenceman like Shea Weber.

You can dismiss the numbers and say that anything that insinuates Ryan Suter isn't playing at an elite level must be wrong, but it's worth bearing in mind that the accepted elite defencemen in this league such as Duncan Keith, Alex Pietrangelo, Drew Doughty, Zdeno Chara and P.K. Subban are all positive Corsi players. Isn't it strange that Suter isn't?

In my opinion, whether by the eye-test or by the numbers, the Wild need more from Suter. He is often talked about as a top-5 or top-10 player in this league but I don't think we've seen that this season. He's been good, but he needs to be great if this team is gonna turn into a serious threat come playoff time.

So, what are your thoughts on all of this, Wilderness? Any suggestions of other things I could've looked at here, or anything I missed? Leave a comment in the comments section. I'm interested to hear some opinions on this.

[P.s. Major props to SomeKindOfNinja, the site I used for all the shot location data and some of the player usage charts. Also, thanks to Stats.HockeyAnalysis, BehindTheNet, ExtraSkater and Hockey Abstract for various other numbers.]