How many goalies have had similar game time in their first or second season in the NHL at a similar age to Darcy Kuemper and what kind of trajectory did their careers follow after that?

The Wild's goalie situation has been a mess for the last couple of seasons. Josh Harding missed almost all of 2012/13 due to complications arising from his MS, came back this season and played himself into Vezina consideration before MS once again robbed him of playing time and potentially ended his season and maybe his career. Niklas Backstrom underperformed but was healthy last season and earned himself a new 3 year contract in the Summer. This season he has been mostly injured but has played badly when he has been available.

Darcy Kuemper went from being the #2 in the goalie prospect pipeline behind Matt Hackett to playing 6 games in the NHL last season after Hackett was traded to the Buffalo Sabres. He started this season terribly with a couple of very shaky performances and needed an extended spell in the AHL to re-find his game. With Backstrom and Harding being unavailable, Kuemper was thrust into the starting role and has played brilliantly in 2014. He started 16 consecutive games before the Wild traded for Ilya Bryzgalov to lighten the load somewhat. His play in January and February very likely saved Mike Yeo's job after a terrible run of results in December and he covered up the poor play of the team during that period where they suffered injuries to key players like Mikko Koivu, Zach Parise and Jared Spurgeon.

It seems like the Wild are ready to commit to Kuemper as the #1 goalie for the foreseeable future. While he is very inexperienced, he's nearly 24 and has a solid career behind him already. The danger is that his amazing performances in 2014 might not be indicative of future performance. The sample size is very small and it's worrying that he could rebound later in the season or next year. This concern prompted me to investigate some career comparables to see if there are any overriding trends for goalies who have a great season early in their career.

-Firstly, here are Kuemper's basic stats for his two seasons in the NHL:

-I used Hockey-Reference.com to produce a list of goalie seasons with the following criteria:

This criteria produced 33 individual seasons by 26 different goalies. I listed each goalie's ES Sv% season-by-season for their careers. In the rare instance where a goalie only saw limited action, I discounted seasons with fewer than 4 games played. A couple of goalies on the list had such brief careers that I omitted them for the study and just worked with the 24 goalies plus Kuemper.

-Here are the goalies season-by-season even strength Sv% for their first 5 years in the NHL (right click + select 'Open Link In New Tab' to see full size): 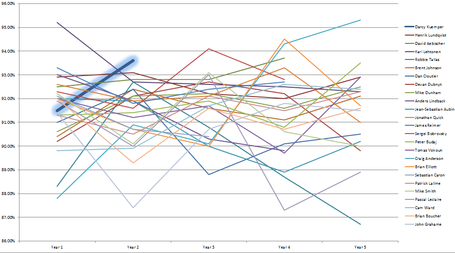 -Here are the goalies who have a comparable average ES Sv% to Kuemper over their first two seasons:

-Now, here are those numbers in chart form: 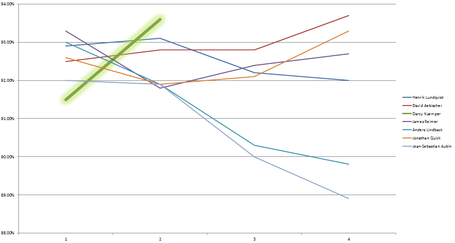 *
So, there really isn't much to be learned from all of this. Goaltending results are erratic and, without large sample sizes, it's hard to make a true assessment of a goalie's talent. Kuemper has made a nice start to his career, and there's no reason why he can't follow a similar career trajectory to Henrik Lundqvist or James Reimer, but there's still a danger he'll regress next year and fail to establish himself as a long-term starter.
More: Ryan Suter is Not Having a Norris-worthy Season
It's fun to look at these graphs just to see where Kuemper stacks up against recent history. Hopefully I'll be revisiting this in a couple of years to see that he has maintained a steadily excellent Sv%.

What are your thoughts on this, Wilderness? Leave a comment and then go tell all your friends.