[Wild About Numbers]: Who Is Matt Moulson & What Does He Do?

So now that the dust has settled, it's time for some in-depth analysis to see what kind of player Matt Moulson is.

Share All sharing options for: [Wild About Numbers]: Who Is Matt Moulson & What Does He Do?

Moulson's a 30 year old LW who will be 31 early next season. He was born in Mississauga, Ontario and played for Cornell University in the ECAC for for years. He was drafted 263rd overall by the Penguins in 2003 and then was signed by the Kings in 2006. He spent most of the next three seasons in the AHL with the Manchester Monarchs, playing 29 times for the Kings before signing a 1-year contract with the Islanders and debuting for them at the start of the 2009/10 season.

He would play every game of the next 3 seasons for them and score more than 30 goals each time. He was a Lady Byng finalist in 2013. Early this season, he was traded along with a 1st and 2nd round pick to the Sabres for Thomas Vanek. He played 44 games for a team severely lacking in NHL talent and scored 11 goals with 18 assists before being traded to the Wild.

One of my first thoughts about him is that he doesn't seem to miss any time with injuries, which is something the Wild sorely need as a team who seem to always have some key player on IR.

I managed to convince Islanders fan, and blogger, Garik to give us some insight into Moulson's play:

Moulson is a REALLY one-dimensional player. He plays near zero role in the neutral zone (least amount of entries on team), very little on D (although he's not liabilities on either), etc.

He does one thing, and one thing well: Scoring goals (he also can pass a little). Of course, he's REALLY good at scoring goals. He's the prototypical example of the guy who somehow is ALWAYS in front of the net, finding pucks at EV or on the PP. He's not big, but somehow he always gets there.

(He also rarely commits penalties, although i see he's committed a few more than usual with the sabres).

Thanks to Garik for the insight. Make sure to check out the blog he runs with a couple of other writers, "Hockey-Graphs", the best new blog on the block in my opinion. Plenty of great articles to read there if you have the time.

-Here are Player Usage Charts (courtesy of SomeKindOfNinja) from 2011/12, 2012/13 and 2013/14 for Moulson and his team's other forwards. The colour indicates positive or negative Corsi Rel and the bubble size indicates the amount. Open image in a new tab to see full size: 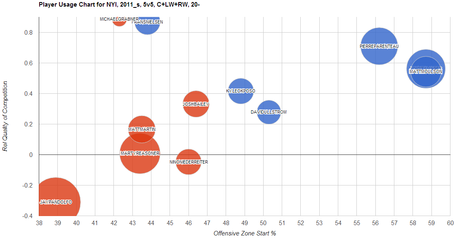 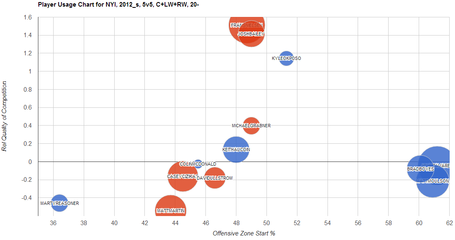 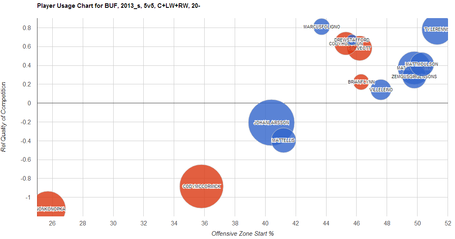 -Next, let's look at a different Player Usage Chart (this time from Hockey Abstract) showing Moulson vs Wild forwards in 2013/14. The bubble colour indicates positive or negative Corsi Rel and the depth of the colour indicates amount. Bubble size equals TOI/G: 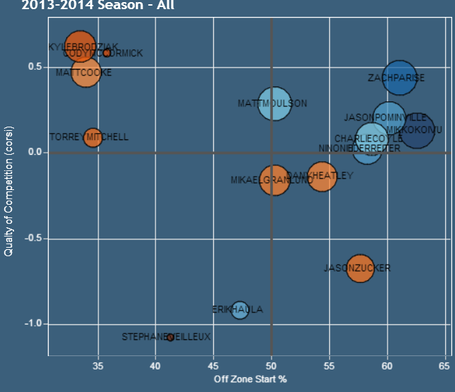 -Here's the same chart but with the Y-Axis changed to represent Quality Of Teammates: 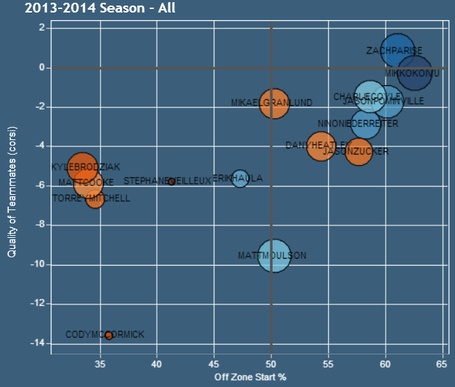 -Here are some scoring stats from this season for Moulson vs Wild forwards:

-Here's how big a role he played in his team(s) even-strength and powerplay minutes this year:

Okay, that's enough stats for one night. To summarise, Moulson looks like a guy who is gonna score a lot of goals if you put him with a good centre in slightly sheltered minutes (which the Wild can do).

Ideal situation: Put him with Koivu and Pominville. Koivu carries the defensive load and sets up Moulson with his slick passing. Pominville's work rate and battling means they always have the puck. They'll play slightly tough competition but should crush most lines.

I'm not sure I like the idea of Moulson with Granlund due to the two of them lacking somewhat defensively and in terms of neutral zone play. Granlund with Parise and Nino makes for a very strong 2nd line.