[Wild About Numbers]: Jonathon Blum Has Shown So Far That He Belongs In The NHL

A low-key offseason signing, Blum has shown in his brief appearances in the NHL this year that he is good enough to stick with the Wild for the rest of the season.

Share All sharing options for: [Wild About Numbers]: Jonathon Blum Has Shown So Far That He Belongs In The NHL

I've written at length this year about the struggles of the Wild's bottom pairing and the effect this lack of blueline depth may be having on the play of Ryan Suter (and, to a lesser extent, Jonas Brodin) by forcing him to play more. I've also noted the sheer lack of offence the Wild generate, particularly from their defencemen. The Wild have been missing a 3rd pairing defenceman who can move the puck up the ice and get the offence ticking.

This season, Scandella and Spurgeon have been the most efficient defencemen in terms of scoring points at EV but both of them play fairly tough minutes. Prosser, Ballard and Stoner benefit from softer minutes but don't have the offensive ability to capitalise on it. Matt Dumba may have been able to play this role but he needed to go back to juniors to work on his defensive game.

Meanwhile, Jonathon Blum has been playing in Iowa and scoring at a decent clip (29 points in 54 games). He got a 4-game chance to impress with the Wild back in January and did pretty well but had to wait til March for another chance. He has now played 5 games and has looked very impressive showing an ability to skate the puck into the offensive zone effectively, control possession at the blueline and has looked like he has already built some chemistry with Marco Scandella, who has played with a lot of confidence and freedom in the last few games.

Last night's game against the Kings was actually Blum's 100th NHL game and, at 25, he seems like the kind of player who might get better with an extended run in the team as opposed to Prosser, Stoner and Ballard who are at the point in their respective careers where they aren't likely to change.

With Clayton Stoner possibly done for the season and Keith Ballard nursing an injury, Mike Yeo has tried some interesting new deployments for his defencemen, pairing Prosser with Brodin and Blum with Scandella to start games but swapping them around during games so that Brodin and Scandella always end up with the brunt of the ice time at EV. That seems like a good system going forward (unless Yeo decides to get Folin into the mix which would probably mean Prosser sits). I'd like to see Blum get some PP time to try and ease some of the pressure on Suter. 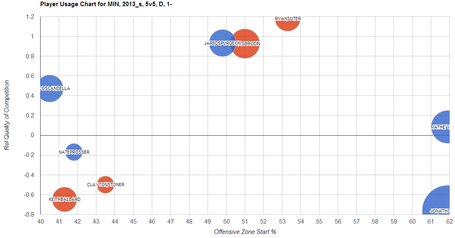 -Here's the same again only this time Y Axis=Quality Of Teammate: 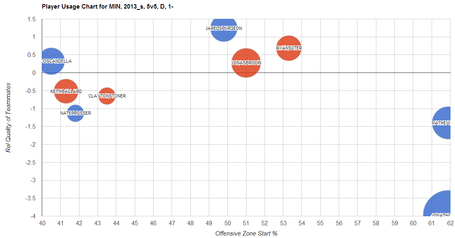 -He is yet to score a point in his 9 games, but here is how well he has done at generating shots:

-Here are his on-ice stats so far this season:

Follow me on Twitter for more Wild talk and thanks to Extra Skater, Hockey Analysis and Some Kind Of Ninja for the numbers used in this article.