[Wild About Numbers]: Taking Stock Of The Wild's Depth Chart Before The Playoffs

With the puck dropping for Game 1 of the Wild's latest adventure in the Stanley Cup Playoffs tonight, today's Wild About Numbers is going to be focused on taking stock of what the Wild have at each position going into the playoffs.

Share All sharing options for: [Wild About Numbers]: Taking Stock Of The Wild's Depth Chart Before The Playoffs

The way I'm going to approach this is to analyse how each player has performed this season in terms of scoring and possession and then try to make a depth chart for the forwards and defencemen. I'm gonna focus on even-strength and 5v5 play because special teams are a bit more complicated to quantify and I don't want this to turn into a tome.

For the Player Usage Charts, open each picture in a new tab so you can see it full size and check what the labels on the X and Y axes are for context of what the chart is telling you. Also, remember, Blue bubble stands for positive Corsi relative to teammates, while Red is negative. The size of the bubble indicates the amount.

-Player Usage Charts showing, first, Quality of Competition and then Quality of Teammates to give context on how each defenceman is being deployed: 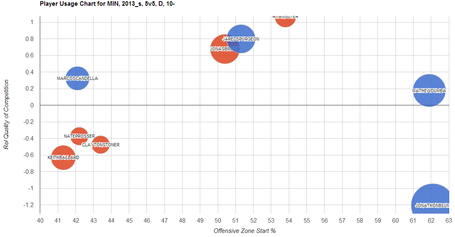 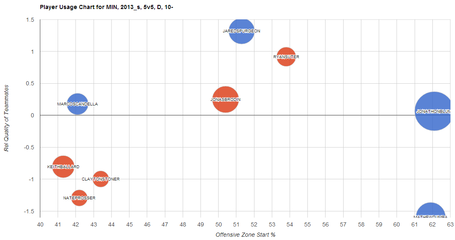 -Firstly, here are the EV scoring rates for each defenceman, ranked by P/60:

-For more perspective of each player's ability to generate offence at EV, here are their individual shot and shot attempt rates:

That depth chart is based on the numbers in this article and isn't necessarily a reflection of what the best pairings are. I gave Suter the nod over Scandella because I felt, despite not having as good numbers, his tough usage and heavy minutes still count for something.

I think those pairings would actually make a lot of sense. Whether they are successful or not would depend a lot on how Suter and Brodin play. Suter needs to be better than he was in the regular season as he will be heavily relied upon against the Avalanche.

The projected pairings from Wild practice feature Prosser on the 3rd pairing instead of Blum, which I just can't understand one bit.

-Same as before, the Y-Axis is Quality of Competition in the first chart, Quality of Teammates in the second: 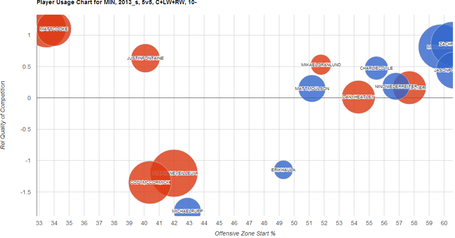 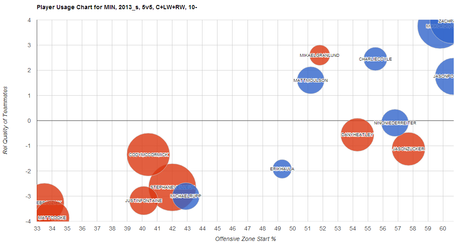 Bear in mind that this is a depth chart based on all the stats in this article and not necessarily what I think the best lines are. Still, part of me would like to see that powerhouse top line deployed against the Avs to just steamroll their best lines.