[Wild About Numbers]: Mikael Granlund, Jonas Brodin & the Importance of the Sophomore Season

The Wild's two most talked about prospects going into last season have had greatly contrasting seasons as rookies and as sophomores.

Share All sharing options for: [Wild About Numbers]: Mikael Granlund, Jonas Brodin & the Importance of the Sophomore Season

It's old news at this point but Mikael Granlund's debut season was an unmitigated disaster after people expected the young forward to step right in and contribute. He looked out-matched physically and fans were worried that maybe he wouldn't figure it out. Jonas Brodin's was the complete opposite as he stepped in and was simply incredible during the shortened season playing alongside Ryan Suter. At just age 19, he was totally composed and would guarantee you at least one breathtaking defensive play per game.

But this year it has been Brodin who has struggled while Granlund has found the level of play that we expected from him when he first arrived. Granlund has been delivering the kind of excellent playmaking that fans expected all along and has grown in confidence as the season has progressed, dominating for Finland at the Olympics and playing on the top line for the Wild when Koivu was hurt.

Brodin looks totally different to last year as he has struggled with bad decision making in the defensive zone and seems to be unable to engineer breakouts or make that first pass out of the zone. He was demoted off the top pairing after December and has been slowly rebuilding his game since.

-Let's look at some numbers to show how these two have played in each of their first two seasons:

-Here is their cumulative average Corsi For% so far their respective NHL careers: 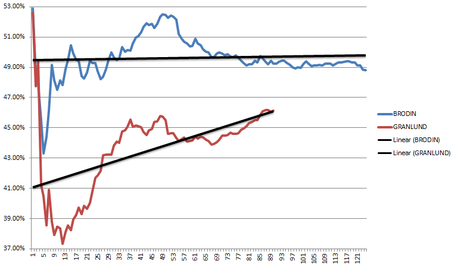 -Here's the same but this time for their Corsi For% Rel: 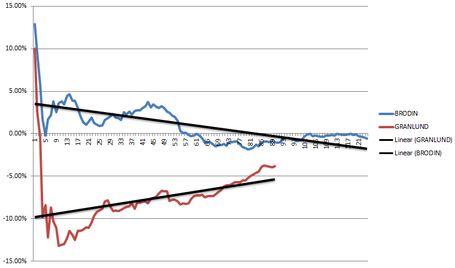 *
There's nothing particularly groundbreaking here as all of this is fairly common knowledge by now. What I draw from this is that nothing is set in stone after a good or bad start to a young player's career. When you look at this current roster, Haula and Kuemper have had great rookie seasons in 2014 but there is no guarantee they won't take a step back next year.
Charlie Coyle's production has been pretty disappointing so far in his NHL career, but there's no reason he can't catch fire next season like Granlund did and become a true top-6 forward.
Even if you look at players who seem to not be living up to expectations such as Jason Zucker and Zack Phillips, it's not out of the realm of possibility that they could figure it out fairly rapidly and become useful players.
It will be interesting to see how Granlund and Brodin develop from here and what kind of players they are in a year or two when they will be closer to their respective primes.