[Wild About Numbers]: Willie Mitchell Is Not The Solution To The 3rd Pairing's Problems

With free agency underway, here's why the Wild should avoid one of the players they've been heavily linked with.

Share All sharing options for: [Wild About Numbers]: Willie Mitchell Is Not The Solution To The 3rd Pairing's Problems

Word on the street over the last couple of weeks is that Clayton Stoner is gonna attempt to cash in on his "great" playoffs and test free agency. Apparently that means the Wild have to sign another gritty, physical 3rd pairing pylon defenceman to replace him. The name that keeps coming up as a possible replacement for Stoner is, ex-Wild, Willie Mitchell. I've made my thoughts on Stoner abundantly clear over the last few months. Time to do the same for Mitchell.

The Wild certainly have a problem with their 3rd pairing, and it isn't a lack of physicality. Over the last couple of years, names like Clayton Stoner, Nate Prosser, Keith Ballard, Justin Falk and Brett Clark have played in that role and the results have been consistently bad. When the 3rd pairing usually consists of two guys who can't keep their heads above water against soft competition and who don't have any notable offensive or defensive skills, it means that the top pairing has to be leaned on even more (which I think caused a dip in the play of Ryan Suter and Jonas Brodin this year) and that the team has a big weak point for other teams to target.

Obviously expectations are lowered for the 3rd pairing and I understand that you can't just have superstars at every position, but with the amount of good players around who are signed to cheap contracts every Summer, it shouldn't be too hard to find someone who might move the needle in terms of possession or scoring rather than settling for someone who has proven that they can't.

With youngsters like Christian Folin, Matthew Dumba and Gustav Olofsson in the equation for next season, I think there's a good chance that the Wild ice at least half a good 3rd pairing. What they will sign to fill the other half worries me.

Willie Mitchell is the classic "defensive defenceman". He plays with aggression, he isn't mobile and he's touted as being a leader/character guy in the locker room. He's just coming off a two-year, $4.5 mil per year contract with the Kings and turned 37 at the back end of last season. He was originally traded to the Wild from the Devils in 2001 for Sean O'Donnell before being traded to the Stars at the 2006 trade deadline for Martin Skoula and Shawn Belle. After spending a few years with the Vancouver Canucks, Mitchell went on to play on two Stanley Cup winning teams for the Kings in 3 years. He missed the entire 2012/13 season to get two knee surgeries. 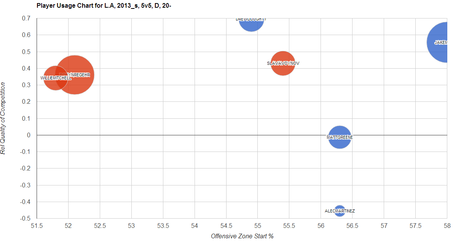 Analysing depth players on a team as great as the 2012-2014 Kings can be tricky. It's easy to post nice possession numbers when you're playing a lot of minutes with Kopitar et al in that fantastic system so one needs to eliminate the teammates factor.
This is where a new metric like "dCorsi" comes in handy. Basically, dCorsi uses all the contextual/deployment factors for a player, regresses the numbers and comes up with an "Expected Corsi" number. A player's dCorsi is that Expected Corsi vs Actual Corsi. So what it shows is the amount a player is over or under-performing the expected results based on their usage.
(There are a couple of Leafs bloggers working on this stuff separately using slightly different formulas. @MimicoHero published his data last week and Steve Burtch from Pension Plan Puppets should have his up somewhere in the near future).

So, using dCorsi Rel, lets see how Mitchell has done each year:

-Here's how he compared to the Wild's defencemen last season:
*
I just don't see why the Wild would bother chasing after this guy. The case against is pretty strong:
People want a gritty, physical guy on the blueline and I don't necessarily disagree that it's not a need. But if you do want to fill that role, then it should be with a player who can actually contribute some kind of positive effect to the team's play. Terms like "hard to play against" are used about guys like Mitchell and Stoner a lot, but if they were hard to play against, teams wouldnt enjoy such great results against them when they are on the ice. Players who are hard to play against are the ones who will keep the puck in your end of the ice all the time and keep you on your heels.
There are usually some decent physical defencemen available as cheap UFAs and, if they're not, GMs are better off just holding onto their money or using it on a player who is actually good, as opposed to one who just fits some kind of "grit quota". Defencemen who can't pass and get by on their physicality are being found out more and more in this league.
Gord Miller of TSN Tweeted out some good points on that subject yesterday:

"Every year at this time, defensive defencemen get bought out, and then on July 1st, teams shell out huge $ for other defensive defencemen."
"I like Igor Larionov's theory: "The best defence is when we have the puck.""
"I know that being a GM is a hard job, but when you look at good teams, they simply don't pay $3m+ for Dmen who don't pass the puck well."

If the Wild are really worried about not having enough grit on the blueline, then maybe they need to take a closer look at the current roster. Ballard throws himself around and will drop the gloves on occasion, Suter and Scandella both have underrated aggression and physicality, Folin has a reputation for playing with some nastiness, Dumba is known for big open ice hitting and Spurgeon is called "TANK" around here for a reason.

Anyway, that's my case for why Willie Mitchell should be avoided. What are your thoughts, Wilderness?
Leave a comment below and share it around. Don't forget to stay on Hockey Wilderness all day for your free agency coverage.