[Wild About Numbers]: Should The Wild Sign Any Of The UFA Defencemen Left On The Market?

After Day 1 of free agency, all the big names are gone. Are any of the remaining scraps worth signing?

Share All sharing options for: [Wild About Numbers]: Should The Wild Sign Any Of The UFA Defencemen Left On The Market?

Yesterday could hardly have gone better for the Wild. Clayton Stoner, Cody McCormick and Willie Mitchell all ended up not signing with the Wild and instead signed comically bad contracts elsewhere, Vanek signed for an incredibly short term and the Iowa Wild roster was shored up with the signings of Guillaume Gelinas as well as Stu Bickel and Brett Sutter.

Apparently the Wild are still looking for a "physical" defenceman to replace Stoner, but Chuck Fletcher is concerned by how bare the market is and how much players like that have been overpaid so far. This means he could go the trade route to fill that role, but if he decides to take a harder look at the UFAs available, he might find there are some decent options left, both in the "physical" mold and the regular just-a-good-defenceman mold.

I used CapGeek's UFA Finder feature to compile a list of UFA defencemen who played at least 40 games last season. I excluded Anton Belov because he is headed for the KHL and Nate Prosser because he just left the Wild, leaving 21 candidates.

To get a quick read on how good these guys are, I decided to use "dCorsi". As I said yesterday, basically, dCorsi uses all the contextual/deployment factors for a player, regresses the numbers and comes up with an "Expected Corsi" number. A player's dCorsi is that Expected Corsi vs Actual Corsi. So what it shows is the amount a player is over or under-performing the expected results based on their usage.
(There are a couple of Leafs bloggers working on this stuff separately using slightly different formulas. @MimicoHero published his data last week and Steve Burtch from Pension Plan Puppets should have his up somewhere in the near future).
-Here is the list of remaining UFA defencemen ranked by their dCorsi Rel rating in 2013/14:

That's still a lot of names so, to narrow it down, I've eliminated players who were in the negative last year and also on average since 2007/08 except for Chris Butler, Jamie McBain and Raphael Diaz, who are 3 players I would like to look at a bit closer due to discussion of them on the blog yesterday.

Before starting my main analysis, I looked a bit closer at the year-to-year numbers for McBain, Butler and Diaz to see if their average was being skewed by one bad year in an otherwise decent career:

-That leaves us with 7 defencemen to consider. Here's how they've performed year-to-year (open in new tab to see full size): 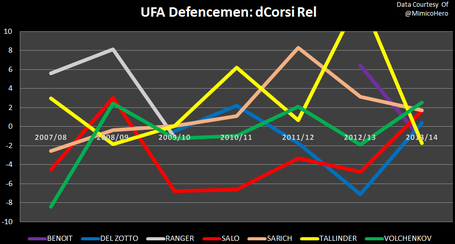 *
So, now that we've narrowed this down to the 3 best canddidates, it's time to figure out which one is the best fit for the Wild. 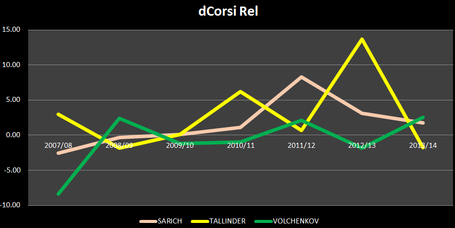 -Here's how each defenceman has scored at 5v5 over a couple of different time periods and where they ranked among other defencemen around the league:

Overall, I think the safest bet for the Wild to make is a 1-year deal for Volchenkov, Tallinder or Sarich. My pick of the 3 is Volchenkov because of his age, his aggressive play and the fact that he is left-sided.

With Volchenkov on board, the depth chart could look like this:

Michael Del Zotto would be a good signing if the Wild are interested in a low risk/high reward project and Paul Ranger is a bit of a mystery but could pay dividends on a cheap contract.

Either way, there are clearly some solid options still out there, so I hope Chuck Fletcher signs one of these guys rather than someone like Tim Gleason or, God forbid, Douglas Murray.

What do you think, Wilderness? Are any of these guys worth signing?