[Wild About Numbers]:The Wild's Historical Struggles With Possessing The Puck

Share All sharing options for: [Wild About Numbers]:The Wild's Historical Struggles With Possessing The Puck

I'm sure by now all of you have heard that Daryl Metcalf, the man behind Extra Skater dot com, has been hired by the Leafs, thus leaving the site defunct. While the site was very new on the scene, it added some cool new features that older sites didn't have and had an extremely user-friendly layout. Extra Skater will be missed for sure by, luckily, people are scrambling to create a new site to replace it, and a couple of contenders emerged yesterday.

There's a ton of cool stuff to play around with on both sites and I'm sure they will be tweaked before the season starts (Extra Skater didn't kick into gear until mid-October last season). One interesting thing I noticed on War On Ice during my brief scanning of the site was that they have data going back to 2002/03. Advanced stats normally only encompass 2007/08 onwards (also known as the Behind The Net era) so this is both surprising and exciting. I'll be able to do some fun stuff with this data but, for now, I've just put together something fairly straightforward. 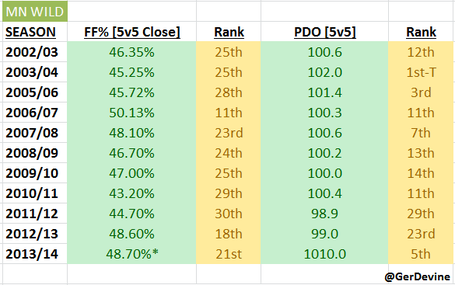 The only season where the Wild cracked 50% possession was 2006/07. I think one can assume that they would've been sub-50% in the franchise's first two seasons too, given that the roster was made up of mostly spare parts. I put an asterix beside last season because I think the Wild would've been a +50% fenwick team if not for injuries.

The 2006/07 team is interesting. They were a point away from winning the Northwest Division, which would've seen them go to the playoffs as the 3rd seed. Instead, they finished 7th and met the Anaheim Ducks in the 1st round. They lost each of the first 3 games of that series by a single goal margin, suggesting they didn't have a whole lot of luck go in their favour.

Take a walk through the Wild's scoring history to see which forwards and defencemen recorded the best and worst ever scoring rates.

Perhaps if they had got that extra point and instead met the Dallas Stars in the 1st round, things might have gone differently. That was a stacked Wild team, featuring Marian Gaborik, Brian Rolston, Pavol Demitra and Pierre-Marc Bouchard firing on all cylinders, as well as Niklas Backstrom during his first, and best ever, season in the NHL.

2003/04 and 2005/06 look like pretty depressing seasons, given that the Wild were so bad possession-wise that they managed to miss the playoffs in spite of sky high PDO. Yikes.

I would have assumed that the 2011/12 Wild were the worst ever due to all the injuries but, amazingly, the 2010/11 model was even worse. No wonder Todd Richards got fired.

With all the development that this team has gone through over the last couple of years, it's worth looking back at just what the Wild are hopefully leaving behind for good. Between 2002/03 and 2013/14, no other team was as bad at possessing the puck. It makes for pretty ugly reading and the lack of success during this era shows why a change in direction was needed.

Another interesting takeaway from that table; the Red Wings are (were?) completely terrifying. Look at the distance between them and the rest of the pack. That's how you make the playoffs every year.

Thanks to War On Ice for all the data.